Pandas str.rpartition() works in a similar way like str.partition() and str.split(). Instead of splitting string on every occurrence from left side, .rpartition() splits string only once and that too reversely (From right side). Unlike .split() method, the rpartition() method stores the separator/delimiter too.

Note: This method is different from the str.partition() method, Instead of spliiting at the first occurrence, the string is splitted at the last occurrence of separator/delimiter.

Parameters:
pat: String value, separator or delimiter to separate string at. Default is ‘ ‘ (whitespace)
expand: Boolean value, returns a data frame with different value in different columns if True. Else it returns a series with list of strings. Default is True.

In this example, the Team column is splitted into list on last occurrence of ‘o’. Before doing any operations, null rows are removed using .dropna() method to avoid errors.

Output:
As shown in the output image, the string ‘Boston Celtics’ was separated on last occurrence of ‘o’. Also the returned list is having separator too. 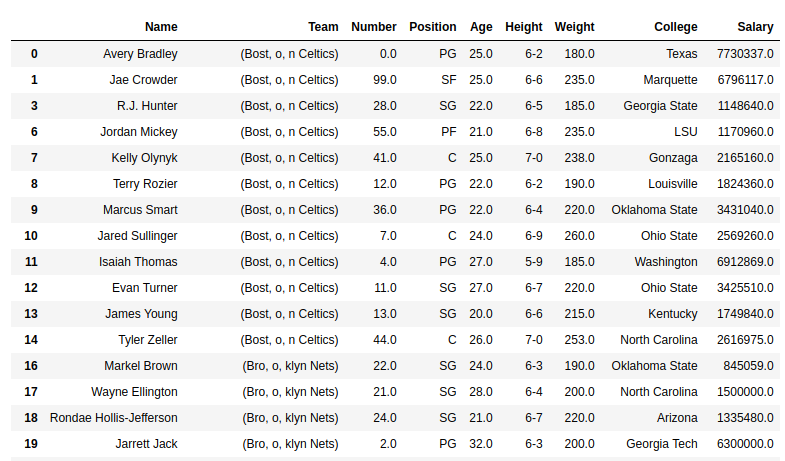 In this example, the Name column is splitted into data frame on last occurrence (First from right side) of ‘a’ by keeping expand Parameter True. Before doing any operations, null rows are removed using .dropna() method to avoid errors.

Output:
As shown in the output image, the string was splitted into data frame on the last occurrence of ‘a’ in string. 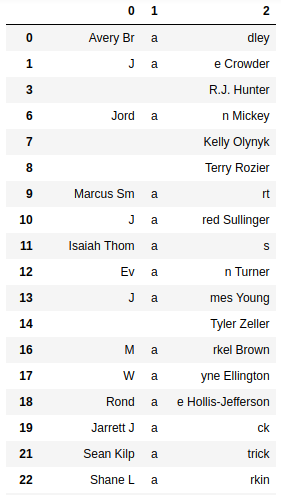 Note: If there is no occurrence of separator in string, the whole string is stored in the last column of data frame/last index of list.