Pandas tail() method is used to return bottom n (5 by default) rows of a data frame or series.

Parameters:
n: integer value, number of rows to be returned

Example #1:
In this example, bottom 5 rows of data frame are returned and stored in a new variable. No parameter is passed to .tail() method since by default it is 5.

Output:
As shown in the output image, it can be seen that the index of returned rows is ranging from 453 to 457. Hence, last 5 rows were returned.

In this example, the .tail() method is called on series with custom input of n parameter to return bottom 12 rows of the series.

Output:
As shown in the output image, top 12 rows ranging from 446 to 457th index position of the Salary column were returned. 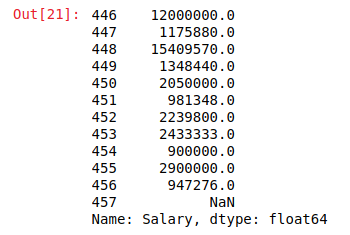