Pandas dataframe.replace() function is used to replace a string, regex, list, dictionary, series, number etc. from a dataframe. This is a very rich function as it has many variations.
The most powerful thing about this function is that it can work with Python regex (regular expressions).

Parameters:
to_replace : [str, regex, list, dict, Series, numeric, or None] pattern that we are trying to replace in dataframe.
value : Value to use to fill holes (e.g. 0), alternately a dict of values specifying which value to use for each column (columns not in the dict will not be filled). Regular expressions, strings and lists or dicts of such objects are also allowed.
inplace : If True, in place. Note: this will modify any other views on this object (e.g. a column from a DataFrame). Returns the caller if this is True.
limit : Maximum size gap to forward or backward fill
regex : Whether to interpret to_replace and/or value as regular expressions. If this is True then to_replace must be a string. Otherwise, to_replace must be None because this parameter will be interpreted as a regular expression or a list, dict, or array of regular expressions.
method : Method to use when for replacement, when to_replace is a list.

For link to CSV file Used in Code, click here 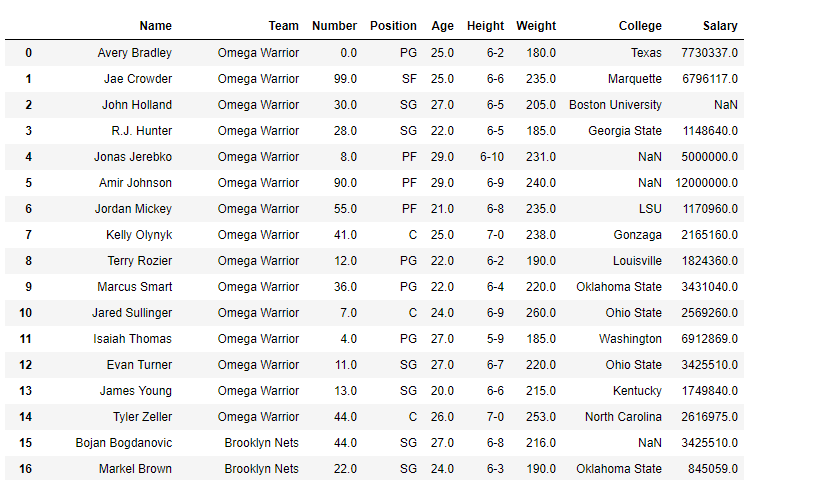 Example #2: Replacing more than one value at a time. Using python list as an argument

We are going to replace team “Boston Celtics” and “Texas” with “Omega Warrior” in the ‘df’ dataframe. 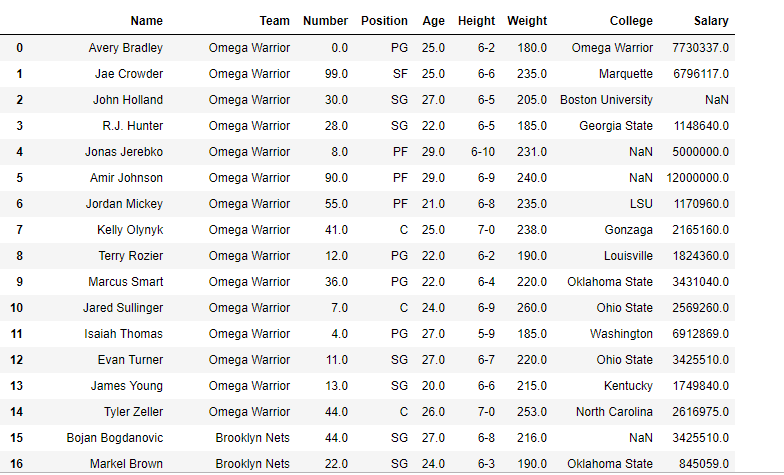 Notice the College column in the first row, “Texas” has been replaced with “Omega Warriors”

Notice all the Nan value in the data frame has been replaced by -99999. Though for practical purposes we should be careful with what value we are replacing nan value.