In Python, object-oriented Programming (OOPs) is a programming paradigm that uses objects and classes in programming. It aims to implement real-world entities like inheritance, polymorphisms, encapsulation, etc. in the programming. The main concept of OOPs is to bind the data and the functions that work on that together as a single unit so that no other part of the code can access this data. 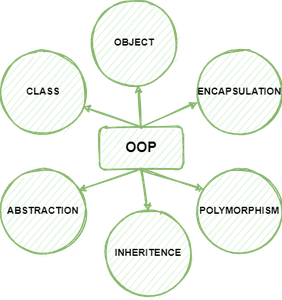 A class is a collection of objects. A class contains the blueprints or the prototype from which the objects are being created. It is a logical entity that contains some attributes and methods.

To understand the need for creating a class let’s consider an example, let’s say you wanted to track the number of dogs that may have different attributes like breed, age. If a list is used, the first element could be the dog’s breed while the second element could represent its age. Let’s suppose there are 100 different dogs, then how would you know which element is supposed to be which? What if you wanted to add other properties to these dogs? This lacks organization and it’s the exact need for classes.

Some points on Python class:

In the above example, we have created a class named dog using the class keyword.

The object is an entity that has a state and behavior associated with it. It may be any real-world object like a mouse, keyboard, chair, table, pen, etc. Integers, strings, floating-point numbers, even arrays, and dictionaries, are all objects. More specifically, any single integer or any single string is an object. The number 12 is an object, the string “Hello, world” is an object, a list is an object that can hold other objects, and so on. You’ve been using objects all along and may not even realize it.

An object consists of :

To understand the state, behavior, and identity let us take the example of the class dog (explained above).

This will create an object named obj of the class Dog defined above. Before diving deep into objects and class let us understand some basic keywords that will we used while working with objects and classes.

When we call a method of this object as myobject.method(arg1, arg2), this is automatically converted by Python into MyClass.method(myobject, arg1, arg2) – this is all the special self is about.

Note: For more information, refer to self in Python class

The __init__ method is similar to constructors in C++ and Java. It is run as soon as an object of a class is instantiated. The method is useful to do any initialization you want to do with your object.

Now let us define a class and create some objects using the self and __init__ method.

Example 1: Creating a class and object with class and instance attributes

Multiple Inheritance:
Multiple level inheritance enables one derived class to inherit properties from more than one base class.

In the above article, we have created two classes i.e. Person (parent class) and Employee (Child Class). The Employee class inherits from the Person class. We can use the methods of the person class through employee class as seen in the display function in the above code. A child class can also modify the behavior of the parent class as seen through the details() method.

Note: For more information, refer to our Inheritance in Python tutorial.

Polymorphism simply means having many forms. For example, we need to determine if the given species of birds fly or not, using polymorphism we can do this using a single function.

Note: For more information, refer to our Polymorphism in Python Tutorial.

Encapsulation is one of the fundamental concepts in object-oriented programming (OOP). It describes the idea of wrapping data and the methods that work on data within one unit. This puts restrictions on accessing variables and methods directly and can prevent the accidental modification of data. To prevent accidental change, an object’s variable can only be changed by an object’s method. Those types of variables are known as private variables.

A class is an example of encapsulation as it encapsulates all the data that is member functions, variables, etc.

In the above example, we have created the c variable as the private attribute. We cannot even access this attribute directly and can’t even change its value.

Note: for more information, refer to our Encapsulation in Python Tutorial.

It hides the unnecessary code details from the user. Also,  when we do not want to give out sensitive parts of our code implementation and this is where data abstraction came.

Data Abstraction in Python can be achieved through creating abstract classes.