Python | Difference between Pandas.copy() and copying through variables

Pandas .copy() method is used to create a copy of a Pandas object. Variables are also used to generate copy of an object but variables are just pointer to an object and any change in new data will also change the previous data.

The following examples will show the difference between copying through variables and Pandas.copy() method.

Example #1: Copying through variables
In this example, a sample Pandas series is made and copied in a new variable. After that, some changes are made in the new data and compared with the old data.

Output:
As shown in the output image, the changes made in new data are also reflected in the old data since the new variable was just a pointer to old one.

Output:
As shown in the output image, the changes in new data are independent and didn’t change anything in old one. 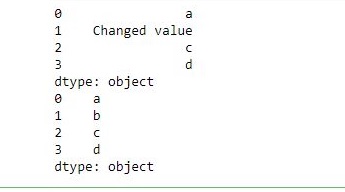