Debugging in Python is facilitated by pdb module (python debugger) which comes built-in to the Python standard library. It is actually defined as the class Pdb which internally makes use of bdb(basic debugger functions) and cmd (support for line-oriented command interpreters) modules. The major advantage of pdb is it runs purely in the command line, thereby making it great for debugging code on remote servers when we don’t have the privilege of a GUI-based debugger.

There are several ways to invoke a debugger

In the output on the first line after the angle bracket, we have the directory path of our file, line number where our breakpoint is located, and <module>. It’s basically saying that we have a breakpoint in exppdb.py on line number 10 at the module level. If you introduce the breakpoint inside the function, then its name will appear inside <>.  The next line is showing the code line where our execution is stopped. That line is not executed yet. Then we have the pdb prompt. Now to navigate the code, we can use the following commands :

Now, to check the type of variable, just write whatis and variable name. In the example given below, the output of type of x is returned as <class string>. Thus typecasting string to int in our program will resolve the error.

We can use ‘whatis‘ keyword followed by a variable name (locally or globally defined) to find its type. 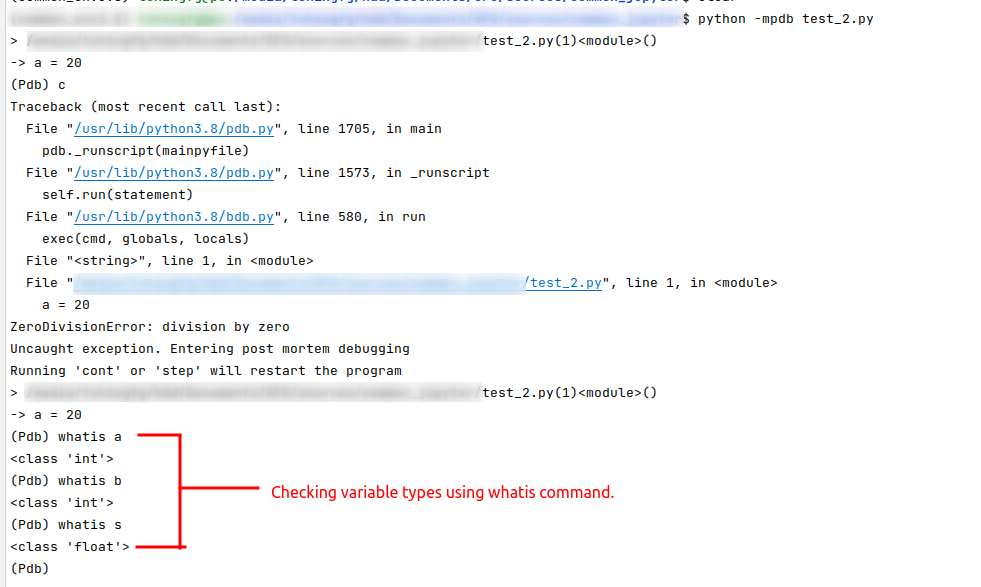 This statement loads your source code and stops execution on the first line of code.

We can navigate in pdb prompt using n (next), u (up), d (down). To debug and navigate all throughout the Python code, we can navigate using the mentioned commands.

Post-mortem debugging means entering debug mode after the program is finished with the execution process (failure has already occurred).  pdb supports post-mortem debugging through the pm() and post_mortem() functions. These functions look for active trace back and start the debugger at the line in the call stack where the exception occurred. In the output of the given example, you can notice pdb appear when an exception is encountered in the program. 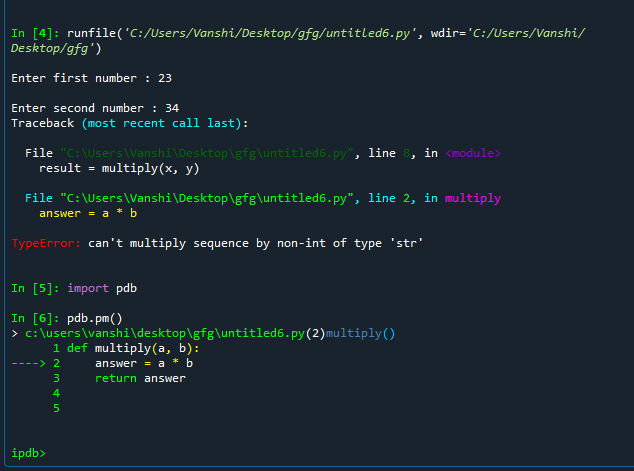 Checking variables on the Stack

All the variables including variables local to the function being executed in the program as well as global are maintained on the stack. We can use args(or use a) to print all the arguments of a function which is currently active. p command evaluates an expression given as an argument and prints the result.

Here, example 4 of this article is executed in debugging mode to show you how to check for variables : 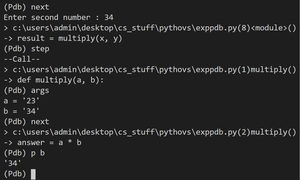 While working with large programs, we often want to add a number of breakpoints where we know errors might occur. To do this you just have to use the break command. When you insert a breakpoint, the debugger assigns a number to it starting from 1.  Use the break to display all the breakpoints in the program.

Given below is the implementation to add breakpoints in a program used for example 4.

After adding breakpoints with the help of numbers assigned to them, we can manage the breakpoints using the enable and disable and remove command. disable tells the debugger not to stop when that breakpoint is reached, while enable turns on the disabled breakpoints.

Given below is the implementation to manage breakpoints using Example 4.