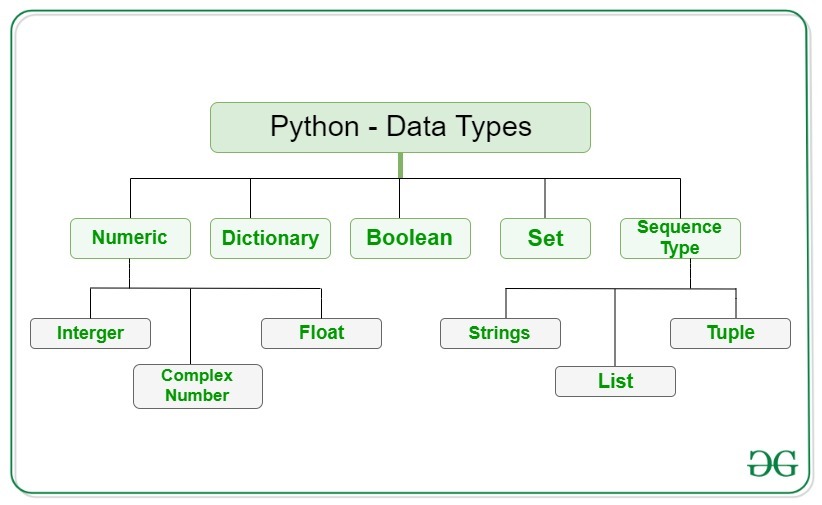 Strings in Python can be created using single quotes or double quotes or even triple quotes.

Lists are just like the arrays, declared in other languages which is a ordered collection of data. It is very flexible as the items in a list do not need to be of the same type.

Lists in Python can be created by just placing the sequence inside the square brackets[].

In order to access the list items refer to the index number. Use the index operator [ ] to access an item in a list. In Python, negative sequence indexes represent positions from the end of the array. Instead of having to compute the offset as in List[len(List)-3], it is enough to just write List[-3]. Negative indexing means beginning from the end, -1 refers to the last item, -2 refers to the second-last item, etc.

Just like list, tuple is also an ordered collection of Python objects. The only difference between tuple and list is that tuples are immutable i.e. tuples cannot be modified after it is created. It is represented by tuple class.

In Python, tuples are created by placing a sequence of values separated by ‘comma’ with or without the use of parentheses for grouping of the data sequence. Tuples can contain any number of elements and of any datatype (like strings, integers, list, etc.).

Note: Tuples can also be created with a single element, but it is a bit tricky. Having one element in the parentheses is not sufficient, there must be a trailing ‘comma’ to make it a tuple.

In order to access the tuple items refer to the index number. Use the index operator [ ] to access an item in a tuple. The index must be an integer. Nested tuples are accessed using nested indexing.

In Python, Set is an unordered collection of data type that is iterable, mutable and has no duplicate elements. The order of elements in a set is undefined though it may consist of various elements.

Sets can be created by using the built-in set() function with an iterable object or a sequence by placing the sequence inside curly braces, separated by ‘comma’. Type of elements in a set need not be the same, various mixed-up data type values can also be passed to the set.

Set items cannot be accessed by referring to an index, since sets are unordered the items has no index. But you can loop through the set items using a for loop, or ask if a specified value is present in a set, by using the in keyword.