Now in this article, we will learn about the use of Box layout widget in kivy using the .kv file and how to add some features like color, size etc to it.

BoxLayout:
Kivy offers several layouts to keep the widgets at the desired places on an application. BoxLayout is a simple yet powerful layout often used either in a nested way or in a simple plain way. BoxLayout arranges widgets in either in a vertical fashion that is one on top of another or in a horizontal fashion that is one after another. When you will not provide any size-hint then the child widgets divides the size of its parent widget equally or accordingly.

1) When orientation set is Vertical 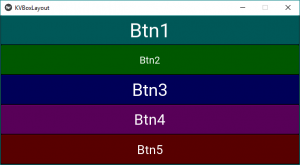 2) When orientation set is Horizontal 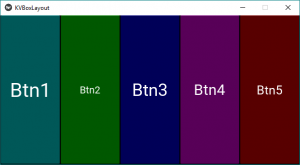