We often get stuck in the middle or encounter errors when we code/run some programs. We usually surf the internet for help and make our code run. But how do we understand the published code on the internet? Some of the typical answers to this question are docstrings, articles written above that code..,

One of the biggest problems in this era is understanding the other’s programs. Situations are even worse if there are no explanatory things like comments, docstrings in the code. As a programmer, we should make our code readable and understandable.

To address the solution, Python provides a module pylint. This article provides a brief introduction to the pylint module and provides tips to get a good score on my code. Let’s Start.

Pylint is a tool that

Pylint tool is similar to pychecker, pyflakes, flake8, and mypy.

To install pylint, make sure Python is installed on your PC. Open the command prompt(Windows) / terminal(Linux) on your PC and type the following command

To verify the pylint installation, type the following command

You should see pylint “2.4.4” version. We can also verify the installation by reinstalling the pylint. In that case, if pylint is already installed you should see Requirement already satisifed on your screen.

Consider the following program that accepts two numbers and prints their sum.

Now save the above program in the file gfg.py
Open your command prompt / terminal and type the following command

In the pylint 2.4.4 version, you will get a report as shown below. Messages might change depending on the version. 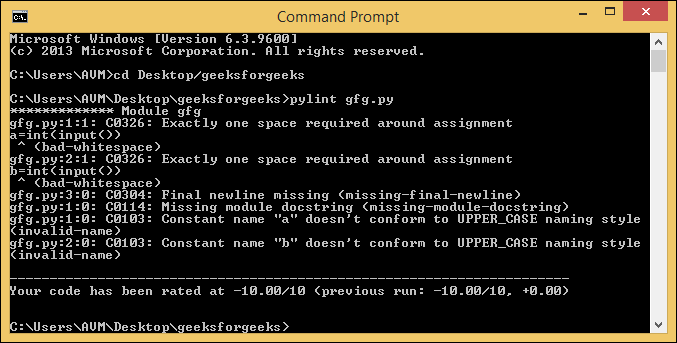 Score for the code given above is -10.0/10.0(Very low). If we get a low score it doesn’t mean that our code is wrong. The score represents how good/bad your code is understandable by another programmer. We need to improve our code by considering the suggestions given in the report.

Each message suggestion/point in the report will be given with a message format that consists of an ID and its meaning. Each ID starts with an alphabet and the rest will be numbered. Each alphabet denotes the type of message object. Some of the message objects are

The modified version of the code is:

If we run the above code using pylint, we will get the following result 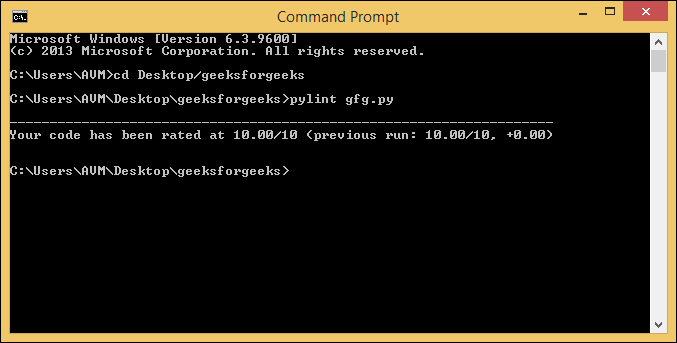 Here we improved our score from -10.0 to 10.0. That’s great. But, is my code understandable? The answer is no. There are some more changes which we need to specify the pylint module to score our code.

As discussed earlier, the pylint module will use the uppercase naming convention by default. The regular expression used to identify that uppercase convention is (([A-Z_][A-Z1-9_]*)|(__.*__))$. We need to add our suggestion as a regular expression that accepts identifiers starting with lowercase alphabets. To do that, open your command prompt and execute the following statement.

.
This will avoid the use of the uppercase convention. We can modify that permanently by changing rules in pylint –generate-rcfile which we will discuss in future articles.