Statement:
The game of Tic-Tac-Toe is being played between two players and it is in below state after six moves. 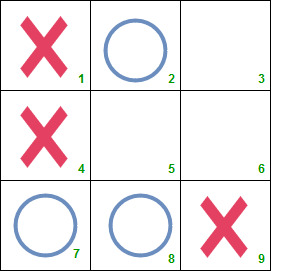 Can you answer following questions?

Assume that both the players are intelligent enough.

Solution:
O will win the game. The sixth mark was X in square 9.

As we know both the players are intelligent enough, the 6th mark could not be O in square 7. Instead, he would have placed O in square 5 and would have won.

Hence, the sixth mark must be X placed in square 9. And the seventh mark will be O. Thus O will win the game.


This article has been contributed by Vikash Kumar.


Please write comments if you find anything incorrect, or you want to share more information about the topic discussed above