This means that all things derived from F after applying Armstrong’s Axioms are correct functional dependencies and this property is called Soundness. 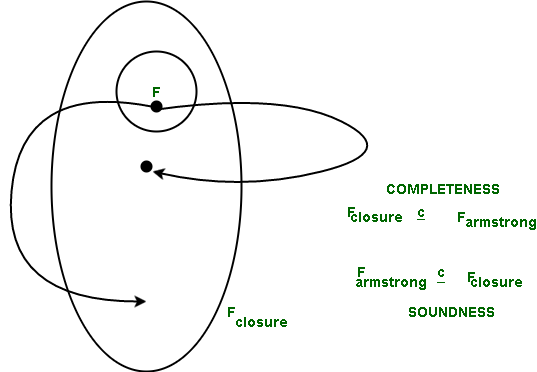 has been derived from F using Armstrong’s Axioms after m number of steps.

In each step we would apply the rules of reflexivity, augmentation and transitivity.
(If we derive from Axioms which are only 3 in number, the repeated application of them would also give similar results.)

Rule of Reflexivity –
This rule states that if E is a proper subset of G, then G implies E (

). This rule always results in correct Functional Dependencies because it is a trivial functional dependency.

Rrule of Augmentation –
This rule states that for

, if we add Z on both sides, then we would get

Rule of Transitivity –
This rule states that if

So, applying these 3 rules will always give rise to correct functional dependencies (even if we apply them m number of times).
Hence proved.