It is basically a study of the properties of the triangle and trigonometric function and its application in various cases. It helps find the angles and missing sides of the triangle with the help of trigonometric ratios. Generally, some angle’s values are known from which we get the value of other angles. The commonly known angle angles are 0°, 30°, 45°, 60°, and 90°.

Trigonometric ratios are the ratios between sides of a right-angled triangle. These ratios are given by the following trigonometric functions of the known angle, where perpendicular, base, and hypotenuse refer to the lengths of the sides in the below figure, 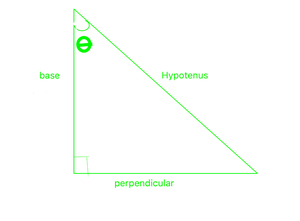 Note The reciprocals of sine, cosine, and tangents also have names: they are cosecant, secant, and cotangent.

There are three Pythagorean Identities,

So the equation becomes,

So the equation becomes,

Question 1: Find the value of sin2x – cos2x in terms of sinx