Scikit-learn is a machine learning library for Python.It features various classification, regression and clustering algorithms including support vector machines, random forests, gradient boosting, k-means and DBSCAN, and is designed to interoperate with the Python numerical and scientific libraries NumPy and SciPy.Learn more on Scikit-learn from here.

Aim & Description: Scotch whisky is prized for its complexity and variety of flavors.And the regions of Scotland where it is produced are believed to have distinct flavor profiles.In this case study, we will classify scotch whiskies based on their flavor characteristics.The dataset we’ll be using contains a selection of scotch whiskies from several distilleries, and we’ll attempt to cluster whiskies into groups that are similar in flavor.This case study will deepen your understanding of Pandas, NumPy, and scikit-learn, and perhaps of scotch whisky.
Source: Download the whiskey regions dataset and whiskey varieties dataset.We will put these datasets in the working path directory.The dataset we’ll be using consists of tasting ratings of one readily available single malt scotch whisky from almost every active whisky distillery in Scotland.The resulting dataset has 86 malt whiskies that are scored between 0 and 4 in 12 different taste categories.The scores have been aggregated from 10 different tasters.The taste categories describe whether the whiskies are sweet, smoky, medicinal, spicy, and so on.

The whisky variety dataset contains 86 rows of malt whisky test scores and 17 columns of taste categories.We add another column to the dataset using the code whisky[“Region”] = pd.read_csv(“regions.txt”), now its 86 rows and 18 columns (The new column is Region information).All 18 column names can be found with the help of the command >>>whisky.columns.We narrow our scope to 18 rows & 12 columns using the whisky.iloc[:, 2:14] command and store the results in a variable called flavors.Using corr() method we compute pairwise correlation of columns of the flavor variable.We code,

Output: The correlation DataFrame is: 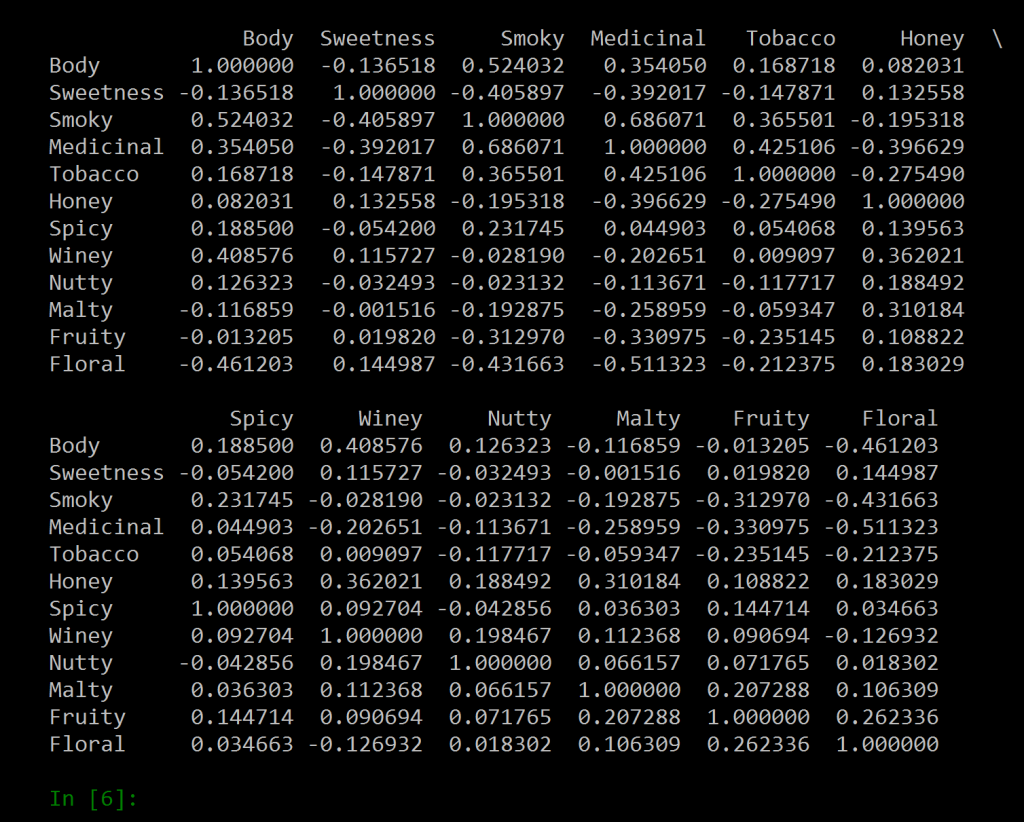 We are going to plot the correlation DataFrame using matplotlib plot.For convenience we will display a colorbar along with the plot.We code,

The goal of co-clustering is to simultaneously cluster the rows and columns of an input data matrix.The matrix is passed to the Spectral Co-Clustering algorithm.

Output: We use SpectralCoclustering() to Clusters rows and columns of the array.The output of the above code is:

We will import the necessary modules and sort the data by group.We try to compare the plot between the rearranged correlations vs the original one side by side.We code,

Output: In the output plot, the first plot is the original correlation plot and the second one is for the sorted and rearranged one.The stark red diagonal in both the figures represent a correlation ratio of 1.

This article is contributed by Amartya Ranjan Saikia. If you like GeeksforGeeks and would like to contribute, you can also write an article using write.geeksforgeeks.org or mail your article to review-team@geeksforgeeks.org. See your article appearing on the GeeksforGeeks main page and help other Geeks.
Please write comments if you find anything incorrect, or you want to share more information about the topic discussed above.