Introduction: We all are very well aware of the terrible safety conditions for women in India nowadays. The instances of rape and sexual harassment have in fact become quite common. In this modern era, trying to contain women within the four wall of the house for the sake of their safety would surely be incorrect. Also, not everyone is fit enough or has enough time or opportunity to learn self-defense. So, there has to be something that would serve as a companion for women 24×7. Rakshak aims to be that companion. Machine Learning is being used widely used to analyze the share market, trends, in health applications, farming applications, and the list goes on. So why not use it for the safety of our women! The idea is to sense emotions using heart rate, skin temperature, and skin conductance and continuously improve the collected data for more accuracy. The emotions need to be checked continuously and will be scaled on 0 to 10. When the emotions such as terror and anxiety rise over a level of 9, indicating a threat to the safety of women, the location (to be measured with A-GPS) will be automatically sent to 2 nearest police stations. This can help in preventing rapes if the police arrive on time. Also, Rakshak can send the signal to police stations without the mobile phone so even if the culprits throw away the phone in order to isolate the victim, the victim can still be saved.

A large amount of data is easily available on the net which can be used to learn emotions. SVM (Support Vector Machine) Model is to be used for ML because out of various methods, SVM provided the maximum accuracy. According to many studies, emotions can be categories based on Arousal and Negative or Positive Valence. From that, we can categorize emotions broadly into four parts – Anger, Joy, Pleasure, Sadness. Anger can further be divided into Terror, Agitation, and Distress. Clearly, if a situation of rape arises, the emotions of the victim would lie in this category. All the three sensors mentioned above require low voltage. Zigbee Technology can be used to upload data on the cloud because of its efficiency which can be observed from its wide use in IoT applications. The flash memory will contain a data-set obtained from research/ net and a few basic algorithms. When the user uses Rakshak for the very first time, she’d be asked to go through a set of videos which would be used to bring out various different types of emotions in the viewer. Each video would be intended to bring out a single kind of emotion and these videos would be separated by a neutral video. The sensors would continuously sense heart rate, skin temperature and skin conductance of the viewer. With the help of SVM, the emotion would be detected. Then a message would be displayed on the user’s phone indicating the type of emotion which was detected. The user would further be asked about the emotion which was actually felt. Calibrations would be made accordingly. The intensity of the emotions would be measured on a scale of 0 to 10. This procedure would be repeated thrice, once each day. After that, the user will have to go through a certain set of disturbing videos (not too much graphic in nature) related to rape. The intensity of various emotions would be measured and this information would be for that particular user only. (For the sake of explanation,
Let’s assume that intensity of terror was 9, Agitation was 8 and Distress was 10.) The user would be shown this data and then asked that on a scale of 0 to 10, what does the user want to have the red values as. (Red values being the intensity at which police would be informed.) After that, the user would only be asked about the emotions, if the intensity of a certain emotion is greater than 5. The sensors would continue to upload data to the Cloud for further improvement in emotion detection. The changes made would also be saved in flash memory so that everything works fine without internet connectivity. A-GPS would be used to provide the precise location in case of network connectivity. In the absence of network connectivity, it’ll still work as a normal GPS. It’ll have a SIM with the help of which the police will be signaled if the intensity of emotions exceeds the red value. 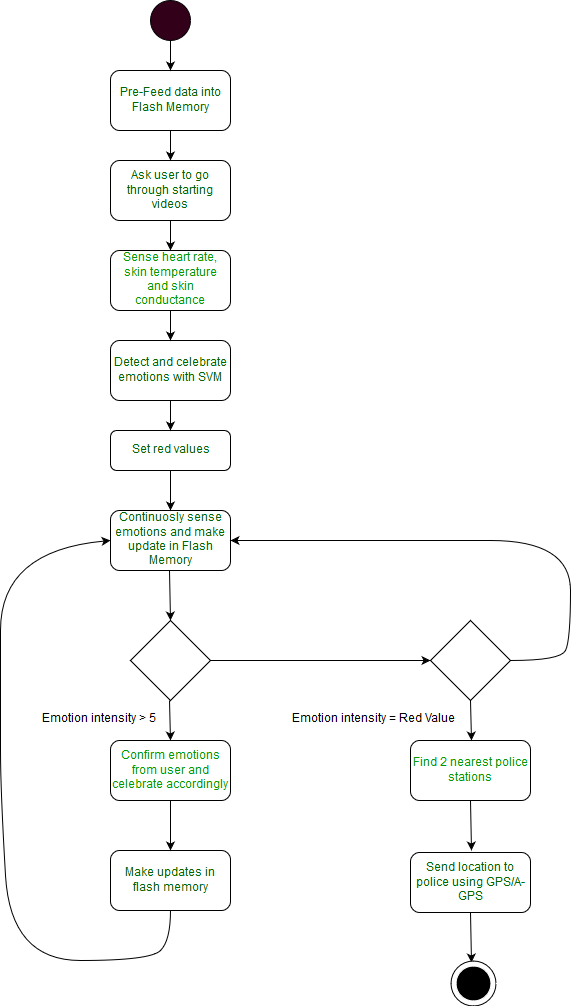 Application: Rakshak can be used for the safety of women (or for any other person). It can help prevent rapes and trafficking. Since emotions are continuously monitored, it can also be used to keep a check on the emotional and mental condition of the user and help prevent suicides. Cases of domestic violence can also be controlled.