Introduction: Street pavement construction and repair includes a huge part of Indian metropolitan
spending budgets. Survey and monitoring upkeep are crucial and important measures against pavement distress like both holes, blocked drains, etc. that can bring down the money related weight of repairs. However best in class street assessment strategies still utilize specialists to perform problem estimations physically. These techniques are frequently too exorbitant, tedious, work concentrated and require specialized ability. In the meantime, drones are progressively sent instead of human administrators where errands are dull and where the danger of introduction to unfriendly conditions is high. Automating road inspection can introduce noteworthy efficiency gains that can help organizations in reacting to early indications of erosion in an auspicious way. In this work, we can build up a framework that dispatches automatic drones to review a territory, analyze the condition of pavements and record imagery and directions of areas requiring repair. This framework introduces another option to on-ground examinations and tools that draw on detection and recognition algorithm simultaneously to recognize potholes. It expands on other ongoing algorithmic arrangements that utilize image processing to gather and translate information on pavement health.

Objective: The outcomes from this mission will be visualized through a web stage that can not just guide urban communities in solidifying a costly information accumulation process, but also in limiting human mistake in the distinguishing and prioritization of issue territories. So necessary steps can be taken by the municipality before the monsoon, season where condition worsens.
Tools Used:

Implementation: The UAV drones for data collection can be used as per different city zones. One zone will include a certain amount of station points where can drone rests or can also be called restore points so that in case of any technical issue or change in proposed flight trajectory the drone can return to these stations and their inspection can be done by the maintenance team. These stations can also be used as automatic charging points. Due to the heavy hardware installed on them, the large flight is not practical. Drones will be designed in such a way that they have a docking point which will be connected to the docket at the stations for charging. Since the drones will be capturing high definition images with its cameras, a system to transmit data on drones will be power-consuming. So, these stations or restore points will be equipped with a high-speed internet connection to transfer data recorded to the cloud so that data captured can be used for further analysis.

Conceptual Framework: When we produce a self-governing mission for the drone then it takes off at the beginning direction of the way travels to every part of the whole region over every street fragment to a continuous waypoint coordinate. As the mission is in progress, a pothole identification algorithm will execute to break down the video feed and search for conceivable pavement distress. At the point when such an area is recognized, a registry is produced on the drone’s installed computers, putting away the directions, timestamp, and picture related with the distress. 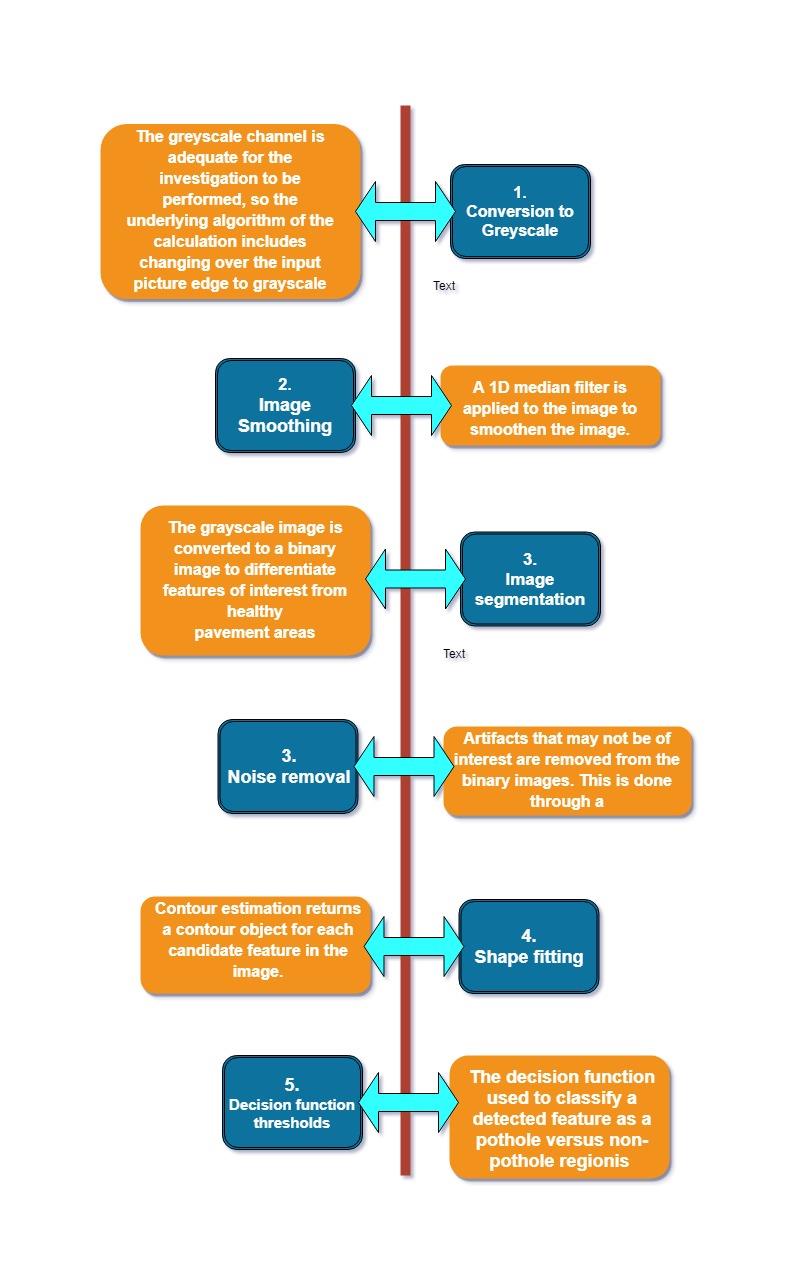 Future Enhancements: Future increments to this framework would be an algorithmic-tuning methodology, to be connected for the image segmentation to work with a specific end goal to enhance the accuracy of the system. Another essential component required to make this framework operational in true situations is hindrance shirking. The product framework can additionally be upgraded by presenting extra sensors, for example, LiDAR, which can give depth information as this information can help significantly in deciding distress seriousness and actualizing an automated prioritization strategy. The advantages of utilizing such a framework are not constrained to the investigation of pavement distress in any case, as the instrument can fill in as a system versatile to different applications, for example, traffic monitoring and measuring air quality index.