Introduction: A lot of people go to supermarkets and retail stores and shops to idle around and window-shop instead of purchasing any products. The thought of analyzing this kind of behavior was intriguing.

Object detection and tracking is one of the areas of computer vision that is maturing very rapidly. It allows us to identify and locate objects in an image or video. With this kind of identification and localization, object detection and tracking can be used to count objects in a particular scene and determine and track their precise locations, all while accurately labeling them.

In this project, we have made use of two of the most popular Python libraries for object detection, OpenCV and ImageAI.

Every supermarket nowadays has at least one CCTV camera installed. And the data is stored in a centralized repository with a timestamp. Our end goal was to identify the people coming in and going out of the supermarket or retail store, and categorize them under the labels “customer” or “not a customer”. By achieving this goal we could calculate the actual cost per customer.

Our workflow was divided into two main segments,

Optimization of the videos

Optimizing the video to make it as light as possible for the algorithm to work smoothly and achieve speed.  A video is nothing but a sequence of images, hence achieving the objective of identifying the object at the lowest-most level of an image will result in achieving the same on a video by iterating the process on all the images that the video is made up of.

Object detection and tracking include:

Tools and Technologies Used in the Project

Command to run the code :

Test Cases to Demonstrate the Output

We decided to check our program on a dummy video, to check if it could count the people coming in and going out of the shops/malls/marts. The system identified the centroids and based on the direction they crossed the gate line, the counter was updated.

As presented in the video, we can see that our program does a good job of counting the number of people accurately. (we didn’t find a lot of videos to test our program on different videos.) 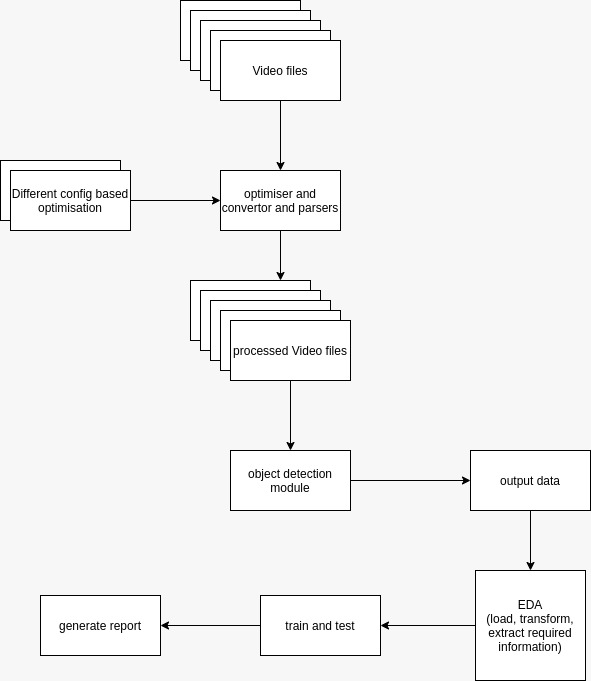 The project can be implemented in various fields, we thought of implementing it in local marts. The objective was simple:

We talk to the owners, and they let us use their computers to run our program on their CCTV footage. After we did that, making an excel sheet of the same and doing some basic visualizations to help the owners figure out the foot of people based on the time of the day. This will help them manipulate the prices accordingly and gain more profits while providing the customers something in return as well.

Example: They can give a discount that is limited to that very specific time period, they make a profit during the times they weren’t and the customers get the products at a cheaper rate than usual. It’s a win-win situation for both.

The application can be applied for various other fields as well, say for example security systems for shops and in public places. The system can be trained to identify threats and inform the nearest authority as an alert + record the event as proof.