Given a function f(x) on floating number x and two numbers ‘a’ and ‘b’ such that f(a)*f(b) < 0 and f(x) is continuous in [a, b]. Here f(x) represents algebraic or transcendental equation. Find root of function in interval [a, b] (Or find a value of x such that f(x) is 0).
Example:

What are Algebraic and Transcendental functions?
Algebraic function are the one which can be represented in the form of polynomials like f(x) = a1x3 + a2x2 + ….. + e where aa1, a2, … are constants and x is a variable.
Transcendental function are non algebraic functions, for example f(x) = sin(x)*x – 3 or f(x) = ex + x2 or f(x) = ln(x) + x ….
What is Bisection Method?
The method is also called the interval halving method, the binary search method or the dichotomy method. This method is used to find root of an equation in a given interval that is value of ‘x’ for which f(x) = 0 .
The method is based on The Intermediate Value Theorem which states that if f(x) is a continuous function and there are two real numbers a and b such that f(a)*f(b) 0 and f(b) < 0), then it is guaranteed that it has at least one root between them.
Assumptions:

Since root may be a floating point number, we repeat above steps while difference between a and b is greater  than and equal to a value ? (A very small value). 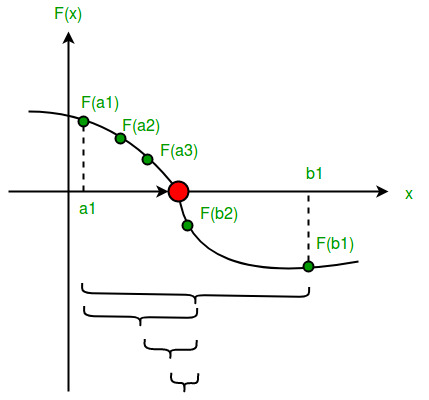 Below is implementation of above steps.

Time complexity :- Time complexity of this method depends on the assumed values and the function.
What are pros and cons?
Advantage of the bisection method is that it is guaranteed to be converged. Disadvantage of bisection method is that it cannot detect multiple roots.
In general, Bisection method is used to get an initial rough approximation of solution. Then faster converging methods are used to find the solution.
We will soon be discussing other methods to solve algebraic and transcendental equations
References:
Introductory Methods of Numerical Analysis by S.S. Sastry
https://en.wikipedia.org/wiki/Bisection_method
This article is contributed by Abhiraj Smit. Please write comments if you find anything incorrect, or you want to share more information about the topic discussed above