Electromagnetic or magnetic induction is the generation of an electromotive force across an electrical conductor in a changing magnetic field. Michael Faraday discovered induction in 1831, and James Clerk Maxwell mathematically defined it as Faraday’s law of induction. Lenz’s law describes the direction of the induced field. The Maxwell–Faraday equation, one of Maxwell’s four electromagnetic equations, was derived from Faraday’s law.

Electromagnetic induction has helped electrical components such as inductors and transformers, as well as devices such as electric motors and generators. 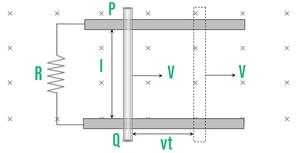 The concept of the generated area can also be utilized to explain the occurrence of induced emf when a conductor moves between two parallel conductor rails (The area swept by the conductor in the magnetic field, during its motion).

Magnetic Force on a Conductor 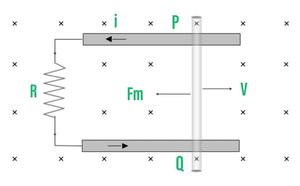 The circuit now has current flowing across it (conductor). A current-carrying conductor experiences a force Fm=Bil (maximum) when moving in a magnetic field, the direction of which may be determined using Fleming’s left-hand rule.

As a result, the magnetic force Fm=Bil acting on conductor PQ is directed in the opposite direction of its velocity, and Fm=Bil=B(Bvl/R)l ; Fm=B2vl2/R

Power Dissipated in Moving the Conductor

In addition, the electrical power dissipated in resistance is used to calculate the rate of heat dissipation across the resistance.

Motion of Conductor Rod in a Vertical Plane

When a conducting rod is released from rest (at t=0), its speed (v) increases, resulting in an induced emf (e), induced current I, and magnetic force (Fm), while the weight of the rod remains constant. 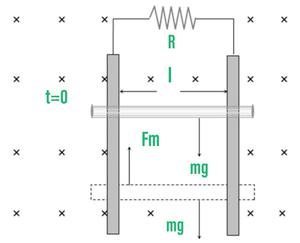 Motion of Conducting Rod on an Inclined Plane 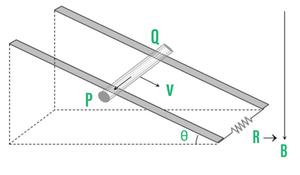 When a conductor begins to slide from the top of an inclined plane, it slides perpendicular to its length but at a (90–θ) angle to the direction of a magnetic field, as depicted. 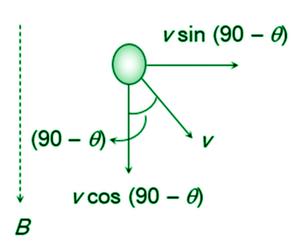 Hence induced emf across the ends of a conductor

So induced current i=Bvlcosθ/R (Directed from Q to P).

The rod will move down with constant velocity only if:

The following are the emfs induced in various examples:

Movement of a train in Earth’s magnetic field: Because the axle of the train’s wheels cuts the vertical component Bv of Earth’s magnetic field, a potential difference between the ends of the axle of the wheels is induced when the train moves on tracks, and the magnetic flux associated with it varies. The potential difference, also known as the emf, is created. e=Bvlv Where l denotes the axle length and v denotes the train’s speed.

Motional EMF Due to Rotational Motion 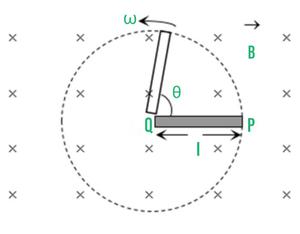 Each metal spoke becomes an identical cell of emf e (say) due to flux cutting, and all such identical cells are connected in a parallel way enet=e (emf of a single cell). Assume N is the number of spokes. 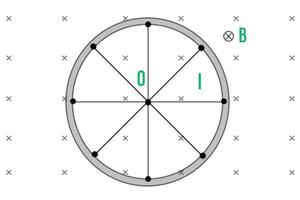 Because all identical cells are connected in parallel, the net emf for the disc is zero. 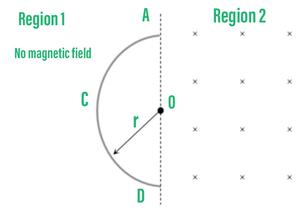 In time t the area swept by the loop in the field, i.e. region II

Flux link with the rotating loop at a time t,
ϕ=BA

Assume that a rectangular coil with N turns is first put in a magnetic field that is perpendicular to its plane. 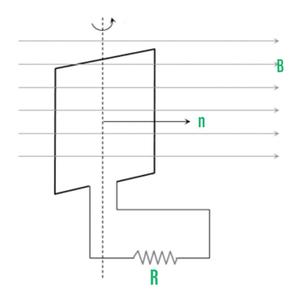 V–Frequency of rotation of the coil

For uniform rotational motion with ω, the flux linked with the coil at any time

Induced EMF in the Coil

Problem 1: A circular antenna with a surface size of 3 m2 has been built in Madurai. The plane of the antenna’s area is inclined at 47o to the Earth’s magnetic field direction. Find the magnetic flux associated with the antenna if the magnitude of the Earth’s field at that location is 40773.9 nT.

Problem 4: Calculate the motional emf induced along a 20.0 km conductor moving at an orbital speed of 7.80 km/s perpendicular to Earth’s 5.00×10−5T magnetic field.

Problem 5: In a magnetic field with a flux density of 2 Wb m-2, a closed coil with 40 turns and an area of 200 cm2 is turned. It spins in 0.2 seconds from a position where its plane forms a 30o angle with the field to a location perpendicular to the field. Determine the magnitude of the induced emf in the coil as a result of its rotation.

Magnitude of the induced emf is

Problem 6: The magnetic flux is driven into the paper perpendicular to the plane of the circuit. If the magnetic flux varies over time according to the following equation: When t = 3 s and B = (2t3 +3t2 + 8t +5) mWb, what is the magnitude of the induced emf in the loop? Determine the current flow direction in the circuit.

Problem 7: A metal conductor of length 1 m rotates vertically about one of its ends at angular velocity 5 radians per second. If the horizontal component of earth’s magnetic field is 0.2×10 −4 T, then the e.m.f developed between the two ends of the conductor?