In Probability Distribution, A Random Variable’s outcome is uncertain. Here, the outcome’s observation is known as Realization. It is a Function that maps Sample Space into a Real number space, known as State Space. They can be Discrete or Continuous.

Random Variable is an important concept in probability and statistics. We need to understand it intuitively and mathematically to gain a deeper understanding of probability distributions that surround us in everyday life.

It’s a function which associates a real number with an event.

Sometimes we are interested not only in the probabilities of the events in the experiments but also in some numbers associated with the experiment. Here’s when we feel the need for random variables.

Let’s take an example of the coin flips. We’ll start with flipping a coin and find out. We’ll use H to mean ‘heads’ and T for ‘tails’.

So now we flip our coin 5 times, and we want to answer some questions.

1. What is the probability of getting exactly 3 heads?

2. What is the probability of getting less than 4 heads?

3. What is the probability of getting more than 1 head?

Then our general way of writing would be:

In a different scenario, suppose we are tossing two dice, and we are interested in knowing the probability of getting two numbers such that their sum is 6.

It is an assignment of a value (number) to every possible outcome. In more mathematical terms, it is a function from the sample space Ω to the real numbers. We can choose our random variable according to our needs. 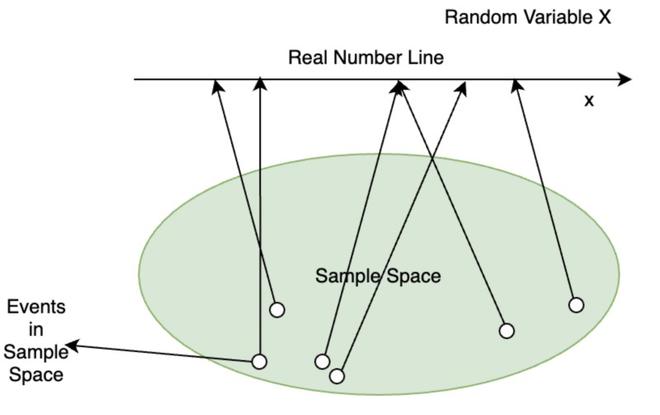 To make this more intuitive, let us consider the experiment of tossing a coin two times in succession.

The sample space of the experiment is S = {HH, HT, TH, TT}. Let’s define a random variable to count events of head or tails according to our need, let X denotes the number of heads obtained. For each outcome, its values are as given below:

Note: More than one event can map to same value of random variable.

A continuous random variable can take infinite values in a continuous domain. Let’s see an example of a dart game.

Probability distribution of a random variable

Now the question comes, how to describe the behavior of a random variable?

Thus, the behavior of X is completely described by giving probabilities for all the values of the random variable X 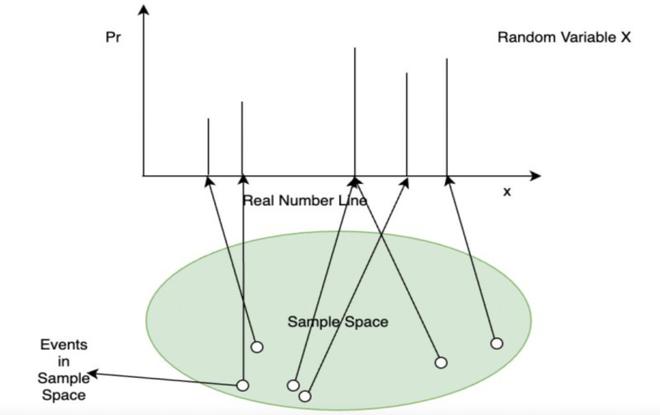 Question: We draw two cards successively with replacement from a well-shuffled deck of 52 cards. Find the probability distribution of finding aces.

Let’s define a random variable “X”, which means number of aces. So since we are only drawing two cards form the deck, X can only take three values: 0, 1 and 2.  We also know that, we are drawing cards with replacement which means that the two draws can be considered an independent experiments.

Now we have probabilities for each value of random variable. Since it is discrete, we can make a table to represent this distribution. The table is given below.

Expectation (Mean) and Variance of a Random Variable

Suppose we have a probability experiment we are performing, and we have defined some random variable(R.V.) according to our needs( like we did in some previous examples). Now, each time experiment is performed, our R.V. takes on a different value. But we want to know that if we keep on doing the experiment a thousand times or an infinite number of times, what will be the average value of the random variable?

The mean, expected value, or expectation of a random variable X is written as E(X) or

. If we observe N random values of X, then the mean of the N values will be approximately equal to E(X) for large N.

i.e it is weighted average of all values which X can take, weighted by the probability of each value.

To see it more intuitively, let’s take a look at this graph below, 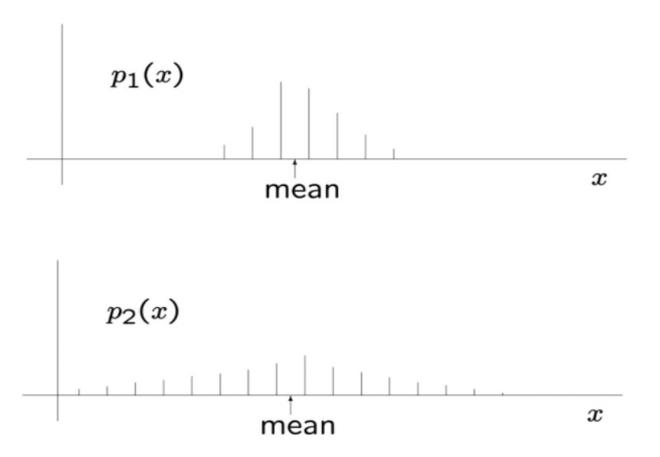 Now in the above figure, we can see both the random variables have the almost same ‘mean’, but does that mean that they are equal? No. To fully describe the properties/behavior of a random variable, we need something more, right?

We need to look at the dispersion of the probability distribution, one of them is concentrated, but the other is very spread out near a single value. So we need a metric to measure the dispersion in the graph.

In Statistics, we have studied that the variance is a measure of the spread or scatter in data. Likewise, the variability or spread in the values of a random variable may be measured by variance.

The variance of X or Var(X) is denoted by,

Let’s calculate the mean and variance of a random variable probability distribution through an example:

Question: Find the variance and mean of the number obtained on a throw of an unbiased die.

Let’s define our random variable X, which represents the number obtained on a throw.

So, the probabilities of the values which our random variable can take are,

Therefore, the probability distribution of the random variable is,

So, therefore mean is

We will study in detail two types of discrete probability distributions, others are out of scope at class 12.

Discrete probability functions assume a discrete number of values. For example, coin tosses and counts of events are discrete functions. These are discrete distributions because there are no in-between values. We can either have heads or tails in a coin toss.

For discrete probability distribution functions, each possible value has a non-zero probability. Moreover, probabilities of all the values of the random variables must sum to one. For example, the probability of rolling a specific number on a die is 1/6. The total probability for all six values equals one. When we roll a die, we only get either one of these values.

Many experiments only have either one of two outcomes. For example, a tossed coin shows a ‘head’ or ‘tail’, a manufactured item can be ‘defective’ or ‘non-defective’. In these cases, we can call one of these outcomes “success” and another “failure”. Let’s say in the coin-tossing experiment if the occurrence of the head is considered a success, then the occurrence of the tail is a failure.

Each time we toss a coin or roll a die or perform any other experiment, we call it a trial. Now we know that in our experiments coin-tossing trial, the outcome of any trial is independent of the outcome of any other trial. In each of such trials, the probability of success or failure remains constant. Such independent trials that have only two outcomes usually referred to as ‘success’ or ‘failure’ are called Bernoulli trials.

Trials of the random experiment are known as Bernoulli trials, if they are satisfying below given conditions :

Let’s take the example of experiment in which we throw a die, throwing a die 50 times can be considered as a case of 50 Bernoulli trials, where result of each trial is either success(let’s assume that getting even number is success) or failure( similarly, getting odd number is failure) and the probability of success (p) is the same for all 50 throws. Obviously, the successive throws of the die are independent trials. If the die is fair and has six numbers 1 to 6 written on six faces, then p = 1/2 and q = 1 – p =1/2 = probability of failure.

Question: An urn contains 8 red balls and 10 black balls. We draw six balls from urn successively. You have to tell whether or not the trials of drawing balls are Bernoulli trials when after each draw, the ball drawn is:

It is a random variable that represents the number of successes in “N” successive independent trials of Bernoulli’s experiment. It is used in a plethora of instances like including the number of heads in “N” coin flips, and so on.

Let P and Q denote the success and failure in the Bernoulli trial. Let’s Suppose we are interested in finding different ways in which we have 1 success in all six trials.

Clearly, six cases are available as listed below:

Likewise, 2 success and 4 failures will show

Question: When a fair coin is tossed 10 times, Probability of:

Every coin tossed can be considered as the Bernoulli trial . Suppose X be the number of heads in this experiment: