By definition, if X is any continuous random variable, then the function f(x) is called a probability density function if:

Density Estimation: It is the process of finding out the density of the whole population by examining a random sample of data from that population. One of the best ways to achieve a density estimate is by using a histogram plot.

A normal distribution has two given parameters, mean and standard deviation. We calculate the sample mean and standard deviation of the random sample taken from this population to estimate the density of the random sample. The reason it is termed as ‘parametric’ is due to the fact that the relation between the observations and its probability can be different based on the values of the two parameters.

Now, it is important to understand that the mean and standard deviation of this random sample is not going to be the same as that of the whole population due to its small size. A sample plot for parametric density estimation is shown below. 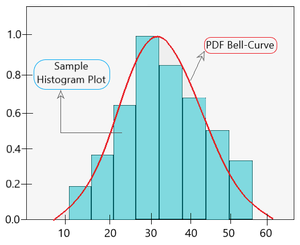 PDF fitted over histogram plot with one peak value

In some cases, the PDF may not fit the random sample as it doesn’t follow a normal distribution (i.e instead of one peak there are multiple peaks in the graph). Here, instead of using distribution parameters like mean and standard deviation, a particular algorithm is used to estimate the probability distribution. Thus, it is known as a ‘nonparametric density estimation’.

One of the most common nonparametric approach is known as Kernel Density Estimation. In this, the objective is to calculate the unknown density fh(x) using the equation given below:

A sample plot for nonparametric density estimation is given below. 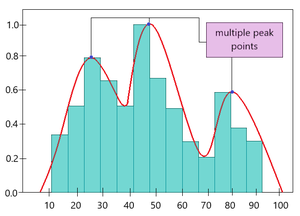 PDF plot over sample histogram plot based on KDE

Probability Distribution Estimation relies on finding the best PDF and determining its parameters accurately. But the random data sample that we consider, is very small. Hence, it becomes very difficult to determine what parameters and what probability distribution function to use. To tackle this problem, Maximum Likelihood Estimation is used.

NOTE: MLE assumes that all PDFs are a likely candidate to being the best fitting curve. Hence, it is computationally expensive method. 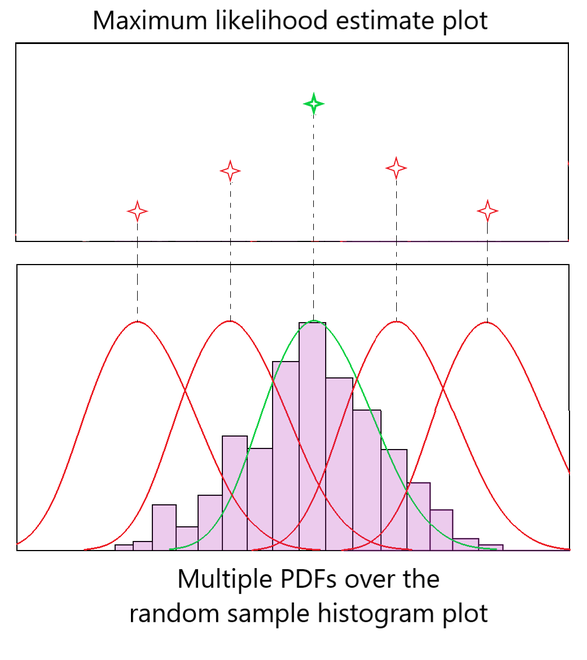 In the intuition, we discussed the role that Likelihood value plays in determining the optimum PDF curve. Let us understand the math involved in MLE method.

We calculate Likelihood based on conditional probabilities. See the equation given below.

In the above-given equation, we are trying to determine the likelihood value by calculating the joint probability of each Xi taking a specific value xi involved in a particular PDF. Now, since we are looking for the maximum likelihood value, we differentiate the likelihood function w.r.t P and set it to 0 as given below.

This way, we can obtain the PDF curve that has the maximum likelihood of fit over the random sample data.

But, if you observe carefully, differentiating L w.r.t P is not an easy task as all the probabilities in the likelihood function is a product. Hence, the calculation becomes computationally expensive. To solve this, we take the log of the Likelihood function L.

Taking the log of likelihood function gives the same result as before due to the increasing nature of Log function. But now, it becomes less computational due to the property of logarithm:

Now, we can easily differentiate log L wrt P and obtain the desired result. For any doubt/query, comment below.