In semiconductors, they can be electrons or openings. In an electrolyte, the charge transporters are particles, while in plasma, an ionized gas, they are particles and electrons.  The SI unit of electric flow is the ampere, or amp, which is the progression of electric charge across a surface at the pace of one coulomb each second. The ampere is a SI base unit Electric flow is estimated utilizing a gadget called an ammeter.  Electric flows make attractive fields, which are utilized in engines, generators, inductors, and transformers. In customary conductors, they cause Joule warming, which makes light in glowing lights. Time-changing flows produce electromagnetic waves, which are utilized in media communications to communicate data.

A potentiometer is an electronic device that measures the EMF (electromotive force) of a cell as well as the cell’s internal resistance. It’s also used to compare the EMFs of various cells. In most applications, it may also be used as a variable resistor.

These potentiometers are widely employed in the production of electronics equipment that allows users to alter electrical circuits to achieve the desired outputs. Although its most obvious application must be for volume controls on radios and other audio-related electronic equipment.

The Trimpot potentiometer’s pin diagram is given below. These potentiometers come in a variety of forms and have three leads. These components are simple to install on a breadboard for prototyping. This potentiometer has a knob on top of it that may be turned to adjust the value. 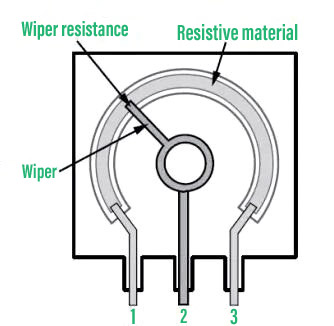 Necessities for the selection of Potentiometer

Potentiometers come in a variety of shapes and sizes, and their selection is based on specific requirements such as the ones listed below.

Construction of a Potentiometer

The fundamental working standard of this depends on the way that the fall of the potential across any piece of the wire is straightforwardly relative to the length of the wire if the wire has a uniform cross-sectional region and the consistent flow moving through it. “When there is no expected distinction between any two hubs there is electric flow will stream”.

Then by Ohms law:

As ρ and A are always constant and current I is kept constant by a rheostat.

Assume that a cell E with a lower EMF than the driver cell is added to the circuit as indicated. Let’s say it’s EMF, E. The potentiometer has now become E in the potentiometer wire, say at length x.

When this cell is connected to the appropriate length (x) in the circuit illustrated above, no current will flow through the galvanometer since the potential difference is equal to zero. As a result, the galvanometer G displays null detection. The length (x) is then referred to as the null point’s length. Now that you have the constant K and the length x, you can solve the problem. We’ll be able to locate the mysterious EMF.

A potentiometer is additionally normally known as a pot. These potentiometers have three terminal associations. One terminal is associated with a sliding contact called a wiper and the other two terminals is associated with a decent obstruction track. The wiper can be moved along the resistive track either by utilization of a straight sliding control or a revolving “wiper” contact. Both turning and direct controls have similar fundamental activities.

These are the most widely recognized sort of potentiometers, where the wiper moves along a roundabout way. These potentiometers are principally used to get a variable voltage supply to a negligible portion of circuits. The best illustration of this turning potentiometer is a radio semiconductor’s volume regulator where the pivoting handle controls the current stock toward the intensifier.

This sort of potentiometer incorporates two terminal contacts where a predictable obstruction can be situated in a semi-roundabout model. And furthermore, it remembers a terminal for the centre that is partnered to the opposition utilizing a sliding contact that is associated through a turning handle. The sliding contact can be turned by turning the handle over the half-roundabout obstruction. The voltage of this can be gotten among the two contacts of obstruction and the sliding. These potentiometers are utilized at any place level voltage control is essential.

There are various types of potentiometers accessible on the lookout, in that mechanical kinds are utilized for controlling physically to change the obstruction just as the yield of the gadget. Notwithstanding, a computerized potentiometer is utilized to change its opposition naturally dependent on the given state. This sort of potentiometer works precisely like a potentiometer and its obstruction can be changed through advanced correspondence, for example, SPI, I2C as opposed to turning the handle straightforwardly.

These potentiometers are called POT because of their POT moulded design. It incorporates three terminals like I/p, o/p, and GND alongside a handle on its zenith. This handle works like control to control the opposition by pivoting it in the two ways like clockwise in any case anticlockwise.

The fundamental downside of computerized potentiometers is that they are basically impacted by various natural factors like soil, dust, dampness, and so on To conquer these drawbacks, advanced Potentiometers (digiPOT) were executed. These potentiometers can work in conditions like residue, soil, dampness without changing their activity.

Advanced potentiometers are likewise called as digiPOTs or variable resistors which are utilized to control simple signs utilizing microcontrollers. These sorts of potentiometers give an o/p opposition that is alterable relying upon advanced data sources. Some of the time, these are likewise called RDACs (resistive advanced to-simple converters). The controlling of this digit should be possible by advanced signals as opposed to through mechanical development.

Each progression on the resistor stepping stool incorporates one switch which is associated with the o/p terminal of the advanced potentiometer. The proportion of the obstruction in the potentiometer is not set in stone through the picked venture over the stepping stool. By and large, these means are shown with a bit esteem, for example. 8-pieces are equivalent to 256 stages.

This potentiometer uses advanced conventions, for example, I²C in any case SPI Bus (Serial Peripheral Interface) for flagging. The greater part of these potentiometers uses basically unstable memory so they didn’t recall their place whenever they are shut down and their last spot might be put away through the FPGA or microcontroller to which they are associated.

Characteristics of a Potentiometer

Measurement of Voltage by Potentiometer

The estimation of voltage should be possible utilizing a potentiometer in a circuit is an exceptionally basic idea. In the circuit, the rheostat should be changed and the current move through the resistor can be changed so that for every unit length of the resistor, a definite voltage can be dropped.

Potentiometers are used in a variety of applications.

A set input voltage applied across the two ends of the potentiometer can be used as a voltage divider to create a manually adjustable output voltage at the slider. The load voltage across RL may now be calculated as follows:

Picture brightness, contrast, and colour response were all controlled via potentiometers. The “vertical hold,” which impacted the synchronisation between the received picture signal and the receiver’s internal sweep circuit, was often adjusted with a potentiometer (a multi-vibrator).

Perhaps the most well-known application is estimating removal. To quantify the dislodging of the body, which is portable, is associated with the sliding component situated on the potentiometer. As the body moves, the situation of the slider additionally changes likewise so the opposition between the proper point and the slider changes. Because of this the voltage across these focuses additionally changes.

The adjustment of obstruction or the voltage is corresponding to the adjustment of the removal of the body. Accordingly, the voltage change shows the removal of the body. This can be utilized for the estimation of translational just as rotational dislodging. Since these potentiometers work on the guideline of opposition, they are additionally called resistive potentiometers. For instance, the shaft revolution may address a point, and the voltage division proportion can be made corresponding to the cosine of the point.

The upsides of the potentiometer incorporate the accompanying.

The disservices of the potentiometer incorporate the accompanying.

Question 1: What is the concept behind a potentiometer?

The potentiometer operates on the concept that the potential difference between any two locations on a uniform current carrying conductor is proportional to the distance between them.

Question 2:  The resistivity of a potentiometer wire is given as 5 x 10-6 Ωm. The area of cross-section of the wire is given as 6 x 10-4 m2. Find the potential gradient if a current of 1 A is flowing through the wire.

Question 3: What are the advantages of the Potentiometer?

The upsides of potentiometer incorporate the accompanying.

Question 4: What is Potentiometer?

A potentiometer is an electronic device that measures the EMF (electromotive force) of a cell as well as the cell’s internal resistance. It’s also used to compare the EMFs of various cells. In most applications, it may also be used as a variable resistor. These potentiometers are widely employed in the production of electronics equipment that allows users to alter electrical circuits to achieve the desired outputs. Although its most obvious application must be for volume controls on radios and other audio-related electronic equipment.

Question 7: What are the characteristics of a potentiometer?