An atom is the smallest part of an element or compound that takes part in a chemical reaction. They are made of tiny particles known as protons, neutrons, and electrons. The Greek philosopher Democritus was the first person to use the term atom.

The structure of the atom was discovered by John Dalton in 1808 in a book he published. He is also known as the “Father of atomic theory”. They are tiny particles composed of a nucleus and one or more electrons in their orbit. The nucleus of an atom consists of positively charged protons and negatively charged neutrons. The protons and neutrons of an atom have approximately the same mass. The orbits of an atom are present around the nucleus describes the location and wave-like behavior of an electron. Now, here in the present article, we are going to discuss the case of Potassium and Calcium.

Potassium is the first element in the periodic table’s fourth period. The name potassium is derived from the mineral Potash. For hundreds of years, the element has been used. It, along with lithium, rubidium, sodium, caesium, and francium, is an alkali metal. Potassium has an atomic mass of 39.098 atomic mass units. It is represented by the letter ‘K.’

Potassium is rated as the 7th most abundant element found on the earth’s surface. It is mainly found in ingenious rocks and sediments of minerals. Potassium naturally occurs in ionic salts. it is found dissolved in seawater which is 0.04% by weight. Potassium is a good conductor of heat and electricity. It is an extremely active metal that is never found free in nature; instead, it is always found in compounds with other elements.

Following is the summarized details of Potassium:

Isotopes of Potassium: Potassium has three isotopes, which are known as Potassium-39, 40, and 41. Potassium-40 is a radioactive element that may be found in rocks, plants, and animals. It is used to determine the age of an object. This isotope decays into an argon isotope.

The nucleus is made up of 19 protons and 21 neutrons. The nucleus is bound by 19 electrons, with a single, highly unstable electron in the outer shell (ring). The chemical and physical characteristics of an element are determined by the stability of its outer electrons. 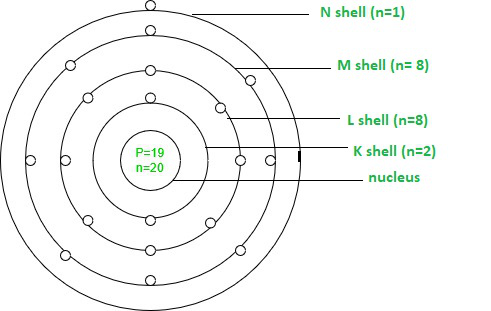 The electronic configuration is given as,

Physical Properties of Potassium are:

Chemical Properties of Potassium are:

Calcium, with atomic number 20, is denoted by the symbol Ca in the periodic table. Calcium (Ca) is an essential mineral that helps our bones stay strong and capable of bearing our weight. Calcium is also employed by our nervous system to aid in the transmission of impulses throughout our bodies.

Calcium is rated as the 5th most abundant element found on the earth’s surface. It gives cations at the time of ionization The outermost shell of calcium comprises two valence electrons. The most common calcium compound found on Earth is calcium carbonate. Gypsum, anhydrous, fluorite, etc are also some of the sources of calcium.

Following is the summarized details of Calcium:

There are 20 protons and 20 neutrons in the nucleus. There are 20 electrons occupying accessible electron shells (rings). The chemical and physical characteristics of an element are determined by the stability of its outer (valence) electrons. 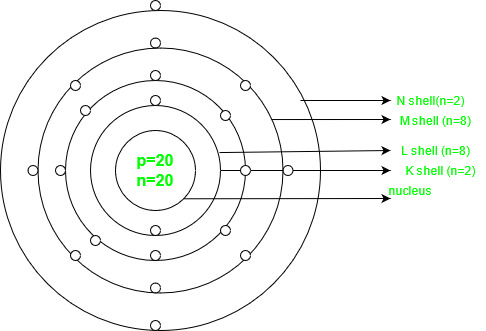 The electronic configuration of a Calcium atom is given by:

Physical Properties of Calcium are:

Chemical Properties of Calcium are:

Problem 1: Which is the most common form of potassium taken by us?

Humans take several forms of potassium but the most common one is potassium chloride. The minimum intake is about 4.7 mg in average.

Problem 2: Why potassium fertilizers are used?

Potassium fertilizers are also named potash fertilizer. It is obtained from the burned away wood, mines, and the ocean. It is highly used as fertilizer because it helps in the growth of plants as well as the movement of stomata.

Problem 3: How calcium can be removed from water naturally?

Calcium is naturally found in water as it may get dissolved from limestone, marble, gypsum, etc. Calcium in the water determines its hardness. We can treat water by adding some sodium carbonate or washing soda in it which will break down the calcium present in it.

Problem 4: What is the biological use of calcium?

The biological use of calcium is to provide strength and structure to the skeleton. It is very significant for the maintenance of bones and teeth.

Problem 5: What are the effects of excessive use of potassium?

Some of the common side effects of potassium are nausea, stomach pain, discomfort, vomiting, and abnormal heart rate.

Problem 6: What are the uses of potassium in the industrial sector?

Potassium is used in industries as a raw material to manufacture potassium metal as well as it is also used in the soap industry as a water softening agent instead of sodium chloride.

Problem 7: Why are dairy products essential for our diet?

Dairy products are highly rich in calcium. Hence, it is essential for our diet as calcium helps in strengthening our bones.