All commercial firms and corporations are never 100% free of data threats. Being wary of scenarios like data corruption, host or network failures or even deliberate storage facility destruction is extremely important. Therefore, backing up data is a critical activity that every firm depends on to ensure its existence in the market. The idea behind backups of servers extends beyond just the ability to contend in the market. Here are a few reasons why backups are done so often:

PostgreSQL has a noteworthy share in the market, setting aside MySQL as the undisputed leader. As is customary for any Database Management System of such a high standard, PostgreSQL provides a set of both logical and physical backups. For those not aware of the difference:

Conceptually, there are several levels of backup (differential, full, incremental etc.) but that is besides the objective of this article. We shall be dealing with the approaches that PostgreSQL offers to its users. Here we shall focus on 3 of them –

A file system level backup is a physical backup. The idea is to make a copy of all files that created the database. This means we are looking at database clusters and directories that are used by PostgreSQL to write the data into the database. One way of interpreting this is by visualizing yourself as the scientist publishing a research paper and using loads of previously written work to give definition to your work. The works you refer to form a framework and layout which guide you throughout your writing process. The files that PostgreSQL attempts to copy are the framework and layout along with guidelines containing the data (specifically a bunch of .dat files).

Notice that a .tar file is created i.e., a tape archive. Meanwhile, rsync is a command that SYNCHRONIZES two directories. So, if Directory 2 does not have the same contents as the first directory (/var/lib/….), then it would after execution – a cleaver form of copying.

However, we must enable archiving prior to execution. Obviously, simply copying data is considered as being careless; ongoing transactions will affect the immediate state of files being copied, leading to a questionable status of the backup and its reliability.

Note: This is a deliberate overlap with the last approach discussed in this article; it helps with improving the quality of the backup.

Therefore, we begin by first enabling WAL archiving. WAL archives are files that maintain all modifications made by transactions in order to keep data in the database and the instance memory consistent.

WAL files are ‘Write-Ahead Log’ files. All transactions performed are first written to the WAL file before those changes are applied to the actual disk space. WAL archives are copies of the WAL files and exist in a separate directory to avoid plausible crashes. 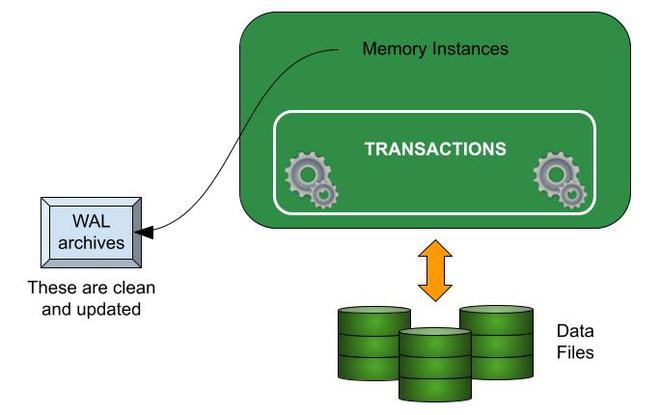 Step 1: Start the backup by first connecting to the database as a privileged user and then running the following. /db is the name of the database you wish to back up.

What this command also does is that it creates a .backup file that helps identify the first and last archive logs. This is important when restoring the database.

In the very likely case that the user forgets to enable WAL archiving, this is displayed on the shell:

Set the following in the postgresql.conf file:

This enables WAL archiving. %p is the path name and %f is the name of the file. Setting parameters in the configuration file is only possible via command line.

Another method of issuing a backup is by using pg_basebackup for the following reasons:

When it comes to smaller Databases, it is much more convenient to execute an SQL Dump. SQL Dumps are logical backups. This implies that the method would backup all instructions that were used to create the schemas and the tables. Therefore, the file that is exported after the backup is literally a file full of DDL and DML commands.

PostgreSQL offers two methods by which an SQL dump may be performed.

pg_dump is a simple command that creates a copy of one of the databases on the server. Think of it as ‘dumping the object files of only ONE database into a new file. At the end of this process, a new file is created which is human-interpretable (filled with SQL commands). pg_dump works with the following options:

The user must first navigate to the \bin folder of the PostgreSQL version installed ON THE TERMINAL or CMD. Once that is done, the command – as stated – may be performed. It is suggested that the output file be created in a known location prior to execution (don’t rely on PostgreSQL to create it for you). In the command above, -W is an option which enables verification of the user via the password. -F is used to specify the format of the output file in the following character (remember to change the extension of the output file). Therefore:

The apparent caveat is how pg_dump is restricted to creating a copy of a single database at a time. For situations where multiple databases in the server must be backed up, PostgreSQL makes available the pg_dumpall command. For most part, its syntax stays the same and so do the options with the exception of –W (honestly, no one really would want to type the password for every single database they backup).

In many cases, firms might prefer to only make copies of the schemas or certain object definitions and not really the data. This is very much accounted for.

Based on multiple IT factions of corporations utilizing PostgreSQL servers for day-to-day procedures, the shortcomings of SQL Dumps easily provide incentive to use other approaches for Backups and Recovery.

Consider a database ‘crimedb’ which stores a record of all criminals in the police registry. We shall attempt a regular backup of all tables. 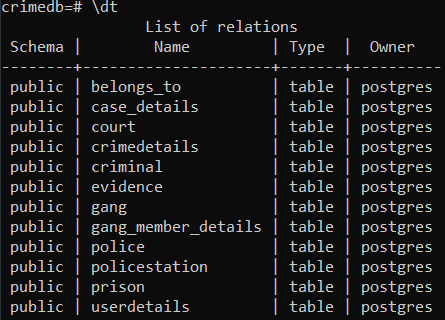 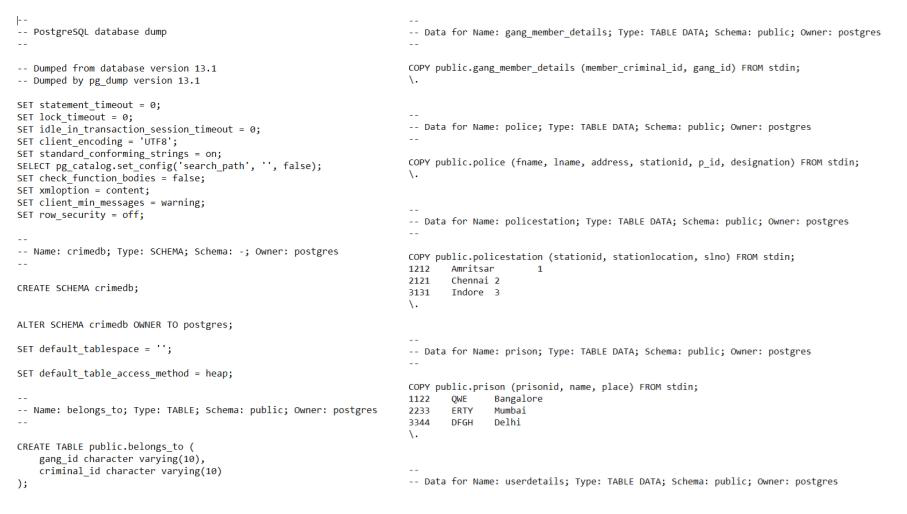 This is a rather complex procedure when compared to the previous approaches discussed. However, the benefits prevail.

Continuous or repetitive archiving combines the ideas of issuing a File System Level Backup and a backup of the WAL files (technically, enabling WAL archiving separately). It may seem like File System Level Backups all over again, but with the added emphasis on retaining and not just archiving the WAL files while the backup is underway. This enables us to take ‘simultaneous snapshots’ of the database when offline. Another difference is with the restoring procedure – recovery of Continuous Archiving backups is much different.

This section deals with Point-in-Time-Recovery Backups. This is a form of continuous archiving where the user may back up and restore data to a certain point in time in the past. The wordplay is based on the latest WAL archive created.

In short, the procedure is as follows:

First, let’s connect to the server and execute the following in the psql shell:

If archiving is disabled then the following is displayed:

The first step (enabling archiving) varies from system to system based on the OS and sometimes the version of Postgres installed. All remaining steps follow a common procedure.

Type services.msc in the taskbar and run it to access this panel.

Now, head to the Postgres.conf file in the \data directory. For example C:\Program Files\PostgreSQL\13\data and make the following parameter changes:

Replace %p with the path of the file we wish to archive which is pg_wal and replace %f with the filename. Be sure to use ‘\\’ for the directories to avoid any issues.

Now, we have a directory created to which we shall write the archives. Also, we have given permission to the Postgres user to write to this directory. We must configure our parameters in the postgresql.conf file. Find the file in the data directory or the main directory of the PostgreSQL version you have installed, manually. Then make the following changes to the file (open the file and edit its contents):

Save and exit the file. You must restart the database server now to apply these changes to the setup. The Linux equivalent of this is:

Open the SQL prompt or SQL Shell (psql) on your system. Connect to the server. Now execute the following query to make a backup.

pg_start_backup( ) and pg_stop_backup( ) may be omitted since, pg_basebackup( ) is capable of handling control on its own. Once the prompt is returned, users may check the directory to which the backup was created and be reassured to find a .tar backup file. It is up to the user to specify the kind of file format preferred (p or t or c).

Now that we have a file system level backup and the WAL archives, we can execute a Point in Time Recovery. Let us assume that our Database crashed and as a result, our data was corrupted or damaged, or destroyed.

Stop the services of the database once the backup has been created and delete all the data within the data directory since the data is no longer validated on account of the DB crash.

This is the extent to which continuous archiving can be dealt with (we are only creating a backup, not restoring it yet). However, the process is rather simple and straightforward since all we require to do is import the backups back into the original folders or the default folders/directories that PostgreSQL used initially upon installation. This is followed by a minor change in the postgresql.conf file and that’s about all there is to it!