Python provides us with a third-party module to operate on polytopes. For one who doesn’t know what polytopes are, Polytopes are a geometrical form in an n-dimensional geometry corresponding to a polygon or polyhedron. Like other geometrical figures such as a square or a cube, a polytope isn’t limited to a single dimension. It can be 2-D, 3-D, or n-D.

Here, A is an m*n matrix, x is a set of coordinates multiplied to A, and B is an m*1 column matrix. The polytope module will allow us to perform some geometrical operations on these polytopes. Let’s get started with the installation:

A polytope is a third-party module, so we would need to install it on our machine before we can use it. To install the module, just type this in the terminal:

After installing, we will import the module into our IDE as:

We will now create a polytope using the polytope module:

Here, we created matrices A and b using numpy arrays. Then we used the .Polytope() function to create a polytope using those matrices. Here, we didn’t specify any value of “x”.

Methods and Operations on Polytopes:

Now that we have created a simple polytope, we can perform some basic operations on them. For example, the polytope module gives us the power to compare two polytopes.
Consider two polytopes, p1 and p2, then:

We can also check if an element is in a polytope using:

Some basic mathematical operations available for polytopes include:

We can iterate over a region of polytopes. A region can be understood as a container containing two polytopes, where one is the beginning and the other is the end. Consider the following code.

The above code will create a region of two polytopes. This can be used as an iterator as: 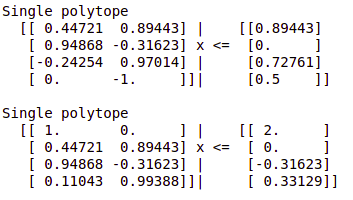