If you were to leave your house on a hot, sunny day, you would undoubtedly wear sunglasses. If you’re watching a 3D movie, you’ll also need 3D glasses. Polarisation has a significant influence in both instances. You will learn about two types of waves in this article: transverse waves and longitudinal waves. You’ll also learn about polarisation and light that is plane polarised. Let’s take a closer look at polarisation and investigate it further.

Polarisation is the process of converting non-polarized light into polarised light. The light in which particles vibrate in all various planes is known as unpolarised light.

Two types of waves are involved in this phenomenon. These are:

A polarised wave is the opposite type of wave. Light waves that vibrate in a single plane are known as polarised waves. Plane polarised light is made up of waves with the same direction of vibration for all of them.

The three types of polarisation based on transverse and longitudinal wave motion are as follows:

Methods Used in the Polarisation of Light

There are a few different ways for polarising light:

We can observe that there is a plane of vibration parallel to the plane in the diagram below. There is also a vibration plane that is perpendicular to the plane. The first picture is one that is not polarised. The second picture is polarised, meaning it is perpendicular or parallel to the first. So let’s start with polaroids to understand polarisation.

Polaroids are polarising materials made up of molecules that are oriented in a specific direction. A pass axis exists on every Polaroid. Only the pass axis will enable light to flow through. Both the horizontal and vertical pass axes can exist on a polaroid. The way light passes through it is determined by these. When the light that is not polarised travels through a polaroid, it becomes polarised. 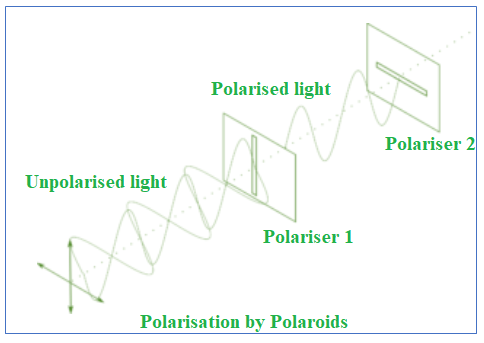 When light strikes a molecule or an atom, the light energy is absorbed and re-emitted in multiple directions. Polarisation causes this scattering. Furthermore, the emitted light travels in many directions.

Polarisation by Reflection and Refraction 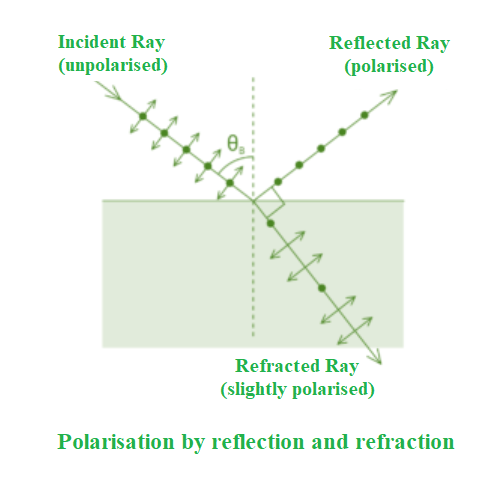 According to Snell’s law,

When light is incident at Brewster’s angle, then

Substitute value of sin r in the formula of μ.

The following are some examples of polarisation applications:

Question 1: A beam of light strikes the surface of a plate of glass with a refractive index of √3 at the polarising angle. What will be the ray’s angle of refraction?

Consider iP be the polarising angle,

Hence, the angle of refraction is 30°.

Question 2: Does the magnitude of the electric field vector vary in the case of linearly polarised light?

The magnitude of the electric field vector fluctuates regularly with time in any form of light, whether polarised or unpolarised.

Question 4: In a polarised wave, what is the direction in which the electric vectors oscillate?

Question 5: Describe a window that allows all incident light to pass through without being reflected.

Brewster window is a practical application of Brewster law. When light strikes a clean glass plate, the majority of the incident light is transmitted (>> 92 percent), while just a small percentage is reflected.