Point-to-Point Protocol (PPP) is basically an asymmetrical protocol suite for different connections or links that do not provide any framing i.e. raw bit pipes. PPP also wants other protocols to establish connection, authenticate users, and also to carry the network layer data. PPP is not a single protocol but a protocol suite that includes protocols that simply address different aspects of point-to-point layer 2 communication. There are basically 2 routers in the PPP session i.e. Initiator (mainly client) and Responder (mainly server).

PPP operation is generally made using three different parameters as given below :

1. Link Control Protocol (LCP) :
LCP is mainly responsible for establishing, maintaining, testing configuring, and terminating the physical connection. It usually works on top of layer 1. It also negotiates all of the other Wide Area Network (WAN) options that are basically controlled by NCPs. All of the LCP Packets are carried in the data field of the PPP Frame. LCP packet is shown below : 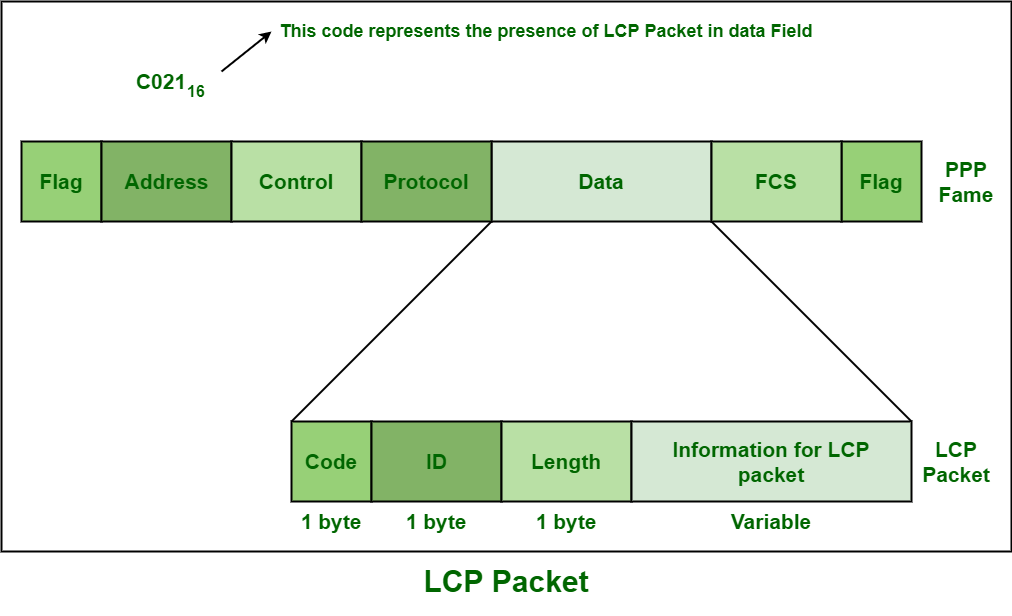 Different LCP protocols are given below :

2. Network Control Protocol (NCP) :
NCPs protocols are basically required to configure the various communication protocols. Each NCP is particular and specific to a network-layer protocol like IP or IPX/SPX or Apple Talk. IP is the most common layer-3 protocol that is being negotiated. At least one NCP is always present there for each and every higher-layer protocol that is supported by PPP. Different NCPs protocols are given below :