Eukaryotic cells found in plants differ significantly from those seen in other eukaryotic organisms in a number of significant ways. Animal and plant cells both have a nucleus and comparable organelles. The existence of a cell wall outside the cell membrane is one of the distinguishing characteristics of a plant cell. Comparatively larger and rectangular than the animal cell is the plant cell. Despite the fact that both plant and animal cells are eukaryotic and share several cell organelles, plant cells are very different from animal cells in that they serve diverse purposes. When the cells are analyzed using an electron microscope, some of these variations may be clearly understood. 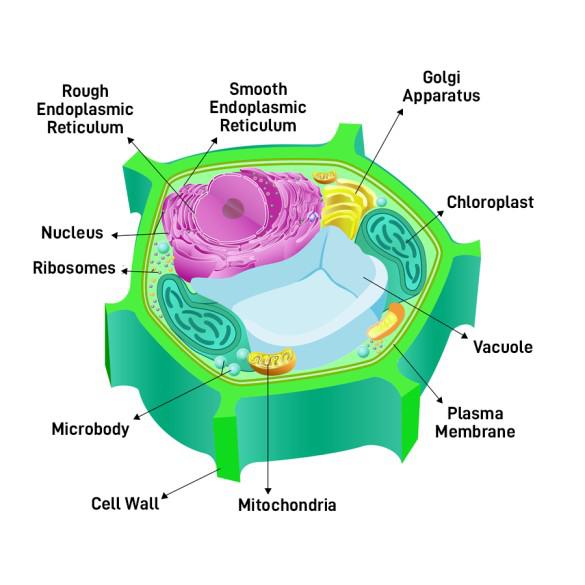 The structure of a plant cell is made up of several parts known as cell organelles that serve the cell’s various needs for survival. Among these organelles are:

The polysaccharides cellulose, pectin, and hemicellulose make up this hard layer. Outside the cell membrane is where it is found. Additionally, it contains polymers like lignin, cutin, and suberin as well as glycoproteins. The protection and support of the cell are the main purposes of the cell wall. The plant cell wall also helps provide the cell form and structure while defending it from mechanical stress. Additionally, it filters molecules that enter and exit the system. Microtubules direct the cell wall’s development. It has three layers: a middle lamella, a secondary lamella, and a primary lamella. Enzymes lay down cellulose to create the main cell wall.

The cell wall contains a membrane that is semi-permeable. A thin coating of protein and fat makes up its structure. The cell membrane is crucial in controlling how certain molecules enter and leave the cell. For instance, the cell membrane transports nutrition and vital minerals while preventing the entry of contaminants.

Only eukaryotic cells have a nucleus, a structure that is membrane-bound. A nucleus’s essential job is to store the DNA or genetic material needed for cell division, metabolism, and growth.

Plastids are DNA-containing membrane-bound organelles. In order to perform photosynthesis and store starch, they are required. Additionally, it is employed in the synthesis of several compounds, which serve as cellular building blocks. Following is a list of some important plastid kinds and their roles:

In an adult plant cell, it takes up around 30% of the total volume. A membrane called the tonoplast encircles the core vacuole. Aside from storage, the central vacuole’s essential job is to maintain turgor pressure on the cell wall. Cell sap fills the central vacuole of the body. Salts, enzymes, and other compounds are mixed in with it.

They are present in all eukaryotic cells and are responsible for dispersing synthesized macromolecules to different cell regions. The Golgi body is made up of five to eight cisternae, or cup-shaped series of compartments. The Golgi apparatus is made up of layered pouches that are flattened and disk-shaped. Typically, a Golgi stack has between 4 and 8 cisternae. However, some protists have up to 60 cisterns. There are 40 to 100 stacks of cisternae in a mammalian cell.

They are the tiniest membrane-bound organelles that contain both protein and RNA. They are also known as the cell’s protein factories since they serve as the locations for protein synthesis. Both prokaryotic and eukaryotic cells contain ribosomes, which are specialized cell organelles. Ribosomes are essential for the creation of proteins in every live cell. The messenger ribonucleic acid (mRNA) that this cell organelle binds to carries information that is decoded by the mRNA’s nucleotide sequence. They enter the ribosome at the acceptor site and transfer RNAs (tRNAs) that contain amino acids. Once it is attached, it continues to add amino acids to the tRNA’s expanding protein chain.

All eukaryotic cells have these double-membraned organelles in their cytoplasm. Because they produce energy by dissolving sugar and carbohydrate molecules, mitochondria are also known as the “Powerhouse of the Cell.” They are crucial in the breakdown of nutrients and the production of molecules that are high in energy for the cell. The mitochondria are the sites of many metabolic processes involved in cellular respiration.

Because they contain digestive enzymes in a membrane-enclosed structure, lysosomes are often known as “suicidal bags.” By breaking down stale food, foreign objects, and worn-out organelles inside the cell, they carry out the task of disposing of cellular waste. The vacuoles play the lysosomes’ function in plants.

A mature and higher plant develops specialized cells that carry out specific crucial tasks that are necessary for their existence. A small number of plant cells are responsible for transporting nutrients and water, while others are responsible for storing food. Included among the specialized plant cells are parenchyma, sclerenchyma, collenchyma, xylem, and phloem cells. Here are a few examples of the various plant cell types:

Question 1: What are the different types of plant cells?

Plant cells can be classified as collenchyma, sclerenchyma, parenchyma, xylem, or phloem.

Question 2: Which organelles are found only in plant cells?

The chloroplast, cell wall, plastids, and a sizable central vacuole are the organelles that are exclusive to plant cells. The green pigment chlorophyll, which is found in the chloroplasts, is what causes photosynthesis to occur.

Question 3: What is the composition of a plant cell wall?

A plant’s cell wall is composed of cellulose. A long, linear polymer of many glucose molecules is called cellulose.

Question 4: Where does photosynthesis occur in plant cells?

Question 5: Why are plant cells generally larger in size compared to animal cells?

A sizable central vacuole makes up the majority of the volume of plant cells, making them larger overall. Animal cells typically lack this vacuole.