Networking Communication :
Sliding window algorithms are methods of flow control for network data transfer. The data link layer uses a sender to have more than one acknowledgment packet at a time, which improves network throughput. Both the sender and receiver maintain a finite-size buffer to hold outgoing and incoming packets from the other side. Every packet sends by the sender must be acknowledged by the receiver. The sender maintains a timer for every packet sent, and any packet unacknowledged at a certain time is resent. The sender may send a whole window of packets before receiving an acknowledgment for the first packet in the window. This results in higher transfer rates, as the sender may send multiple packets without waiting for each packet’s acknowledgment. The receiver advertises a window size that tells the sender not to fill up the receiver buffers.

Solution 1 –
One way to achieve full-duplex transmission is to have two separate channels with one for forwarding data transmission and the other for reverse data transfer (to accept). But this will almost completely waste the bandwidth of the reverse channel.

Solution 2(Piggybacking) –
A preferable solution would be to use each channel to transmit the frame (front and back) both ways, with both channels having the same capacity. Assume that A and B are users. Then the data frames from A to B are interconnected with the acknowledgment from A to B. and can be identified as a data frame or acknowledgment by checking the sort field in the header of the received frame.

One more improvement can be made. When a data frame arrives, the receiver waits does not send the control frame  (acknowledgment) back immediately. The receiver waits until its network layer moves to the next data packet.

Definition of Piggybacking :
This technique in which the outgoing acknowledgment is delayed temporarily is called piggybacking. 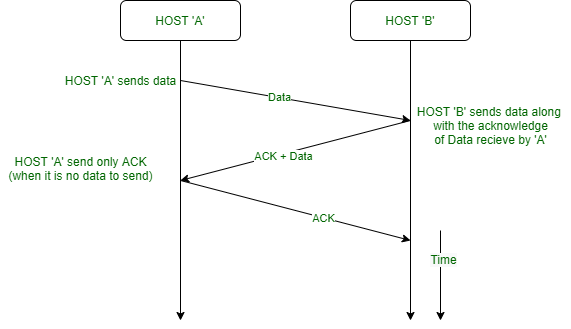 As we can see in the figure, we can see with piggybacking, a single message (ACK + DATA)  over the wire in place of two separate messages. Piggybacking improves the efficiency of the bidirectional protocols.

Conclusion :
There is a dispute as to whether this is a legal or illegal activity, but piggybacking is still a dark side of Wi-Fi. Cyber-terrorist attacks in India are a clear reminder that we cannot control incidents occurring anywhere in the world or control unsecured Wi-Fi networks. So it is the responsibility of the owner and administrator to secure their wireless connection.