An evolutionary or phylogenetic tree both have the same names. It is a branching diagram or tree that represents the relationships that have developed over time between different biological species or other entities based on the similarities and differences in their physical or genetic traits. One phylogenetic tree, which shows a common ancestor for all life on Earth, is present.

Every species or person (in this example) has a common ancestor, as shown in the diagram, and that person is your grandparent. Then it separates into your parent’s and your aunt’s branches (sibling of your parent). Because you were born to different parents yet have a similar ancestor to your grandparent, you, your sibling, and your cousins have a special history. 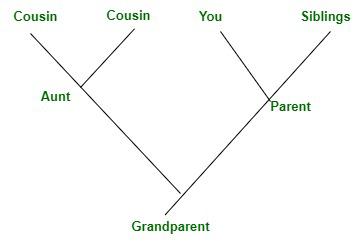 Ancient beliefs of a ladder-like evolution from lower to higher life forms gave rise to the concept of a “tree of life” (such as in the Great Chain of Being). A “paleontological chart” outlining the geological relationships between plants and animals can be found in Edward Hitchcock’s book Elementary Geology as one of the earliest examples of “branching” phylogenetic trees (first edition: 1840). In his ground-breaking book The Origin of Species, Charles Darwin (1859) also created one of the first pictures and played a significant role in popularising the idea of an evolutionary “tree.” The concept that speciation occurs through the adaptive and semi-random splitting of lineages is successfully communicated by tree diagrams, which are still used by evolutionary biologists to represent evolution more than a century after they were first used. The taxonomy of species has evolved to become more dynamic and less static.

Parts of a Phylogenetic Tree

A phylogenetic tree consists of the following components: 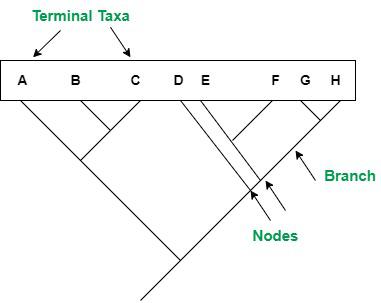 Parts of a phylogenetic tree

The phylogenetic tree is created using one of two different approaches:

This method is also known as the discrete method because it is based solely on the sequence characters. Aligned characters are used in the character-based technique to build the phylogenetic tree.

During the tree inference, these aligned characters either include DNA or protein sequences. Maximum parsimony and Character based approaches are the two most prevalent.

This approach is based on how dissimilar or how far apart the two aligned sequences are from one another. The pairwise distances from the sequence data are then utilized to create a matrix, which is subsequently used to generate the phylogenetic tree in this method.

Any phylogenetic study starts with the following fundamental steps:

Step 1: Setup and alignment of a dataset

Distinct phylogenetic trees are divided into varied groups based on their different traits, such as whether they are rooted, non-rooted, bifurcating, or multifurcating.

It was once thought that multicellular eukaryotic beings descended from ape-like prokaryotes. The evolution process is governed by several forces. One of them is genetic makeup.

Based on morphological, genotypic, and phylogenetic variances and similarities across species, a phylogenetic tree is created.
This means that to create an accurate phylogenetic tree, both observable alterations and changes in DNA sequences are taken into consideration. 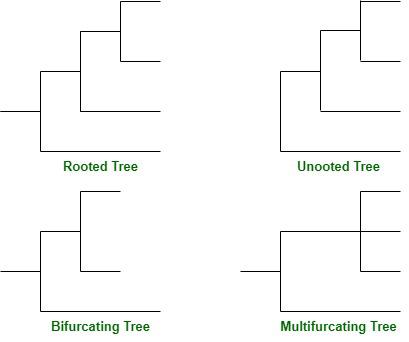 Special Types of the Phylogenetic Trees

The most important data from the disciplines of anatomy, paleontology, molecular genetics, and embryology, may be derived using this essential method. The evolutionary tree also has the following significance:

Difference between a Cladogram and a Phylogenetic Tree

Phylogenetic trees and cladograms are frequently used interchangeably; however, they differ in some ways.

An evolutionary or phylogenetic tree both have the same names. It is a branching diagram or tree that represents the relationships that have developed over time between different biological species or other entities based on the similarities and differences in their physical or genetic traits

Question 2: Write the difference between a cladogram and a phylogenetic tree.

Question 3: Write about the spindle diagram.

A spindle diagram, with the breadth of the spindles denoting different families, illustrates the evolution of vertebrates at the class level. The usage of spindle diagrams in evolutionary taxonomy is common. After its popularisation by the American paleontologist Alfred Romer, a spindle diagram, also known as a bubble diagram, is frequently referred to as a Rome program. To reflect changes in taxon abundance across time, it plots taxonomic diversity (horizontal breadth) versus geological time (vertical axis).

Question 4: What is a cladogram?

A cladogram solely depicts a branching pattern; as a result, its interior nodes do not represent ancestors and its branch lengths do not correspond to time or the relative degree of character change.

Question 5: Write the importance of a phylogenetic tree.