We strongly recommend to refer below basic solution discussed in previous article.
Peterson’s Algorithm for Mutual Exclusion | Set 1
We would be resolving 2 issues in the previous algorithm.

Consider the following example,
There are three processes, P1, P2 and P3. Process P3 is such that it has a while loop similar to the one in our code, doing not so useful computation, and it exists from the loop only when P2 finishes its execution. The scheduler puts all of them in a round robin queue. Now, say the clock speed of processor is 1000000/sec, and it allocates 100 clocks to each process in each iteration. Then, first P1 will be run for 100 clocks (0.0001 seconds), then P2(0.0001 seconds) followed by P3(0.0001 seconds), now since there are no more processes, this cycle repeats until P2 ends and then followed by P3’s execution and eventually its termination. 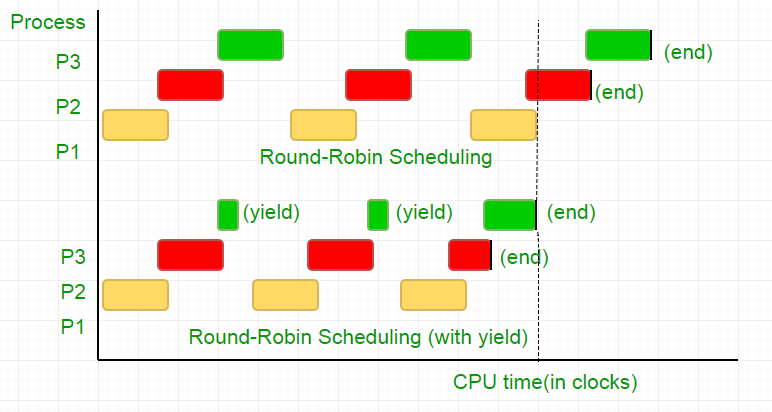 The code in earlier tutorial might have worked on most systems, but is was not 100% correct. The logic was perfect, but most modern CPUs employ performance optimizations that can result in out-of-order execution. This reordering of memory operations (loads and stores) normally goes unnoticed within a single thread of execution, but can cause unpredictable behaviour in concurrent programs.
Consider this example,

To ensure this, compilers provide a instruction that prevent ordering of statements across this barrier. In case of gcc, its __sync_synchronize().
So the modified code becomes,
Full Implementation in C:

This article is contributed by Pinkesh Badjatiya . If you like GeeksforGeeks and would like to contribute, you can also write an article using write.geeksforgeeks.org or mail your article to review-team@geeksforgeeks.org. See your article appearing on the GeeksforGeeks main page and help other Geeks.
Please write comments if you find anything incorrect, or you want to share more information about the topic discussed above.