Socket programming in Perl is a way of connecting two nodes on a network to communicate with each other. Basically, it is a one-way Client and Server setup where a Client connects, sends messages to the server and the server shows them using socket connection. One socket (node) listens on a particular port at an IP, while other socket reaches out to the other to form a connection. The server forms the listener socket while the client reaches out to the server. Before going deeper into Server and Client code, it is strongly recommended to go through TCP/IP Model.

Any computer system that is on a network needs a local port to transfer data over the internet. This data is directed to the designated system with the use of it’s IP Address. Each and every system receives and sends this data over the network by the ports designated for the respective process. For example, port 80 is the default port to receive information sent from the server. This port needs not to be same always, it can be decided by the user as well.
Therefore, a socket is an IP address and a port together, which enables the network connection to send/receive information to other networks or systems.

Socket Programming can be better understood by creating a Server and a client on two different consoles by running Perl scripts and then transferring data between both via a secure connection. 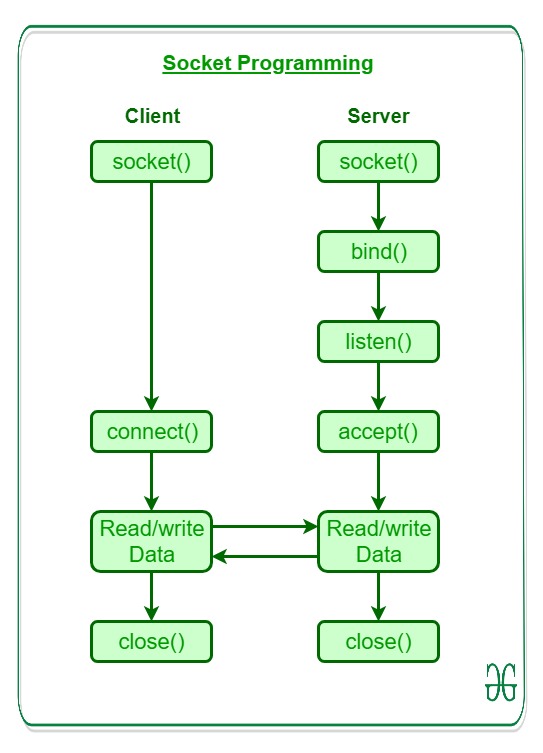 Above image illustrates the calls that are must for running server side and client side scripts in Socket programming.

To create a server in socket programming, the following stages are performed step by step:

-> bind() call is used to bind the socket with a port number. Without a port, the socket will be of no use. The server uses this bind() function to assign a port to a socket.

-> listen() call is to enable the port to wait for any incoming requests. This call is done by the server to provide a limit of the connection requests allowed with the server.

-> accept() call is used to issue a request to the access() function to accept the incoming connections.

If the access() call is successful then a new socket is returned for future connections with the respective client.

To create a client in socket programming, the following stages are performed step by step:

-> connect() call is used to connect the socket with the server by using a specific address.

Here, address is similar to as in bind() call except that it contains the IP address of the remote server.

Script to be run for Server creation:

Save the above script as server_side.pl
Output:

Script to be run for Client creation:

Save the above script as Client_side.pl
Output: