In the above syntax, the goto statement will instruct the compiler to immediately go/jump to the statement marked as LABEL. Here label is a user-defined identifier which indicates the target statement. The statement immediately followed after ‘label:’ is the destination statement. 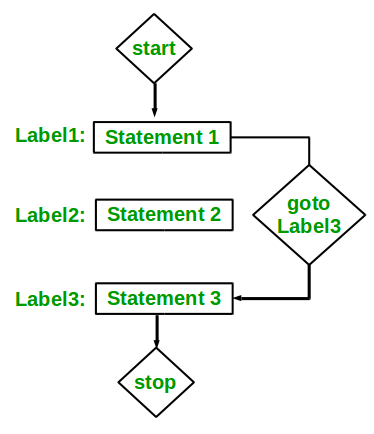 goto statement in Perl is of three forms- Label, Expression, and Subroutine.

goto using LABEL name: LABEL name is used to jump to a specific statement in code and will start execution from that statement. Its reach is limited though. It can work only within the scope from where it is being called.
Example:

goto using Expression: An expression can also be used to give a call to a specific label and pass the execution control to that label. This expression when passed to the goto statement, evaluates to generate a label name, and further execution is continued from that statement defined by that label name.
Example:

goto using Subroutine: A subroutine can also be called with the use of the goto statement. This subroutine is called from within another subroutine or individually based on its use. It holds the work that is to be performed next to the calling statement. This method can be used to call a function recursively to print a series or a range of characters.
Example: