In Perl, a Regular expression(a.k.a regexes or regexps or REs) is a way of describing a set of strings without having to list all strings in your program or simply we can say that it is a sequence of characters that are used for pattern matching. In Perl, regular expressions have different uses:

Another important feature of Regular expression matching is backtracking, which is currently used (when needed) by all regular non-possessive expression quantifiers(used to count total all the matches, instead of the default of matching just once), namely “*”, *?, “+”, +?, {n, m}, and {n, m}?. Backtracking is often optimized internally, but the general principle outlined here is valid(it’s returning from an unsuccessful recursion on a tree of possibilities). Perl backtracks when it attempts to match patterns with a regular expression, and its earlier attempts don’t pan out or simply we can say backtracking means storing the matching patterns for future use.
For Example: /.*?/ might be used to match something similar to an HTML tag like “Bold”. This pushes the two parts of the pattern to match the exact same string, for this case its ‘B’.

Let us take another example, 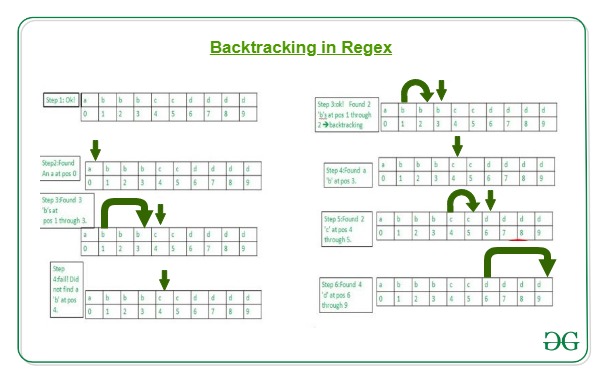 Here we can see we are backtracking into step 3 because step 4 is not feasible, so we backtrack and find the best solution to proceed into step 4.