There are now 118 elements known, and studying the characteristics of all of these elements independently is quite challenging. As a result, all of the elements have been grouped into a few groups such that elements in the same group have comparable qualities. Dobereiner’s triads, Newlands’ law of octaves, and Mendeleev’s periodic table arranged some elements, but there were many demerits with all these arrangements. The modern periodic table, which we now use, is an updated and improved version of the previous tables. 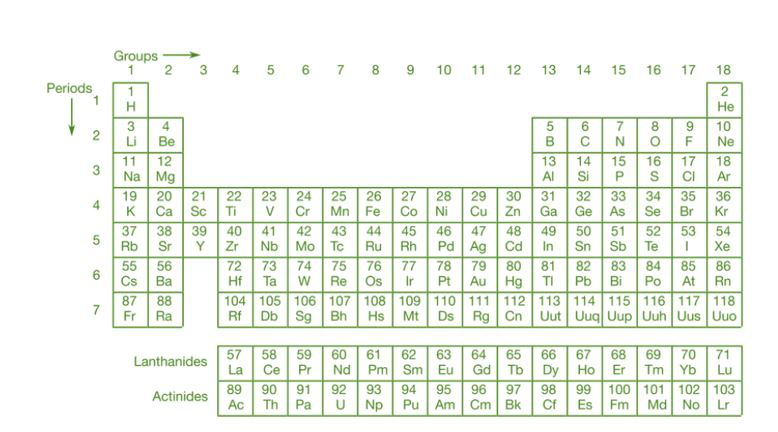 To decide whether an element comes first or last in a period?

The first period begins with hydrogen and finishes with a noble gas, helium. All other periods begin with alkali metals such as lithium, sodium, and potassium and end with noble gases such as neon, argon, and krypton. Every period’s first element has one valence electron, whereas the last element, commonly known as noble gas, has eight valence electrons (except the first period in which the last element helium has only 2 electrons). It can be concluded that the number of valence electrons in the atoms of elements determines which element is the first and which is the last in a period.

Metals and Non-metals in the Modern Periodic Table.

Position of Hydrogen in the Modern Periodic Table.

Question 1: Give some examples of elements with only one electron in their outermost shells.

Question 2: Can an element having atomic number 2.5 be placed between helium and lithium?

Question 3: The atom of an element has electronic configuration 2,8,7. What are the atomic number and the name of the element?

Question 4: Name an element that has only two shells, and both these shells are completely filled with electrons.

All the shells of the noble gases (group 18) are completely filled with electrons. Since the element has only two shells, and the maximum occupancy of first shell is 2 and second shell is 8, so its electronic configuration is 2, 8. So its atomic number will be 2+8=10 and the element with atomic number 10 is Neon. Thus an element which has only two shells, having both these shells completely filled with electrons is Neon.

Question 5: Determine whether Calcium with atomic number 20 is a metal or non-metal.

Question 6: Name an element that contains three times the number of electrons in its second shell as it does in its first.