Pattern matching is a feature that allows testing an expression for the occurrence of a given pattern. It is a feature more prevalent in functional languages. Pattern matching is Boolean in nature, which implies there are two possible outcomes: either the expression matches the pattern or it does not. This feature was first introduced in C# 7.0 and has then undergone a series of improvements in successive versions of the language.

to be expressed by using minimal and succinct syntax. Moreover, these patterns can be nested and can comprise several sub-patterns. Patterns can also be combined using pattern combinators(and, or and not). C# allows pattern matching through three constructs:

// code to be executed if expression

// does not match any of the above patterns

A set of patterns can also be tested using a switch expression to select a value based on whether the pattern is matched.

As of C# 9, the following patterns are supported by the language. 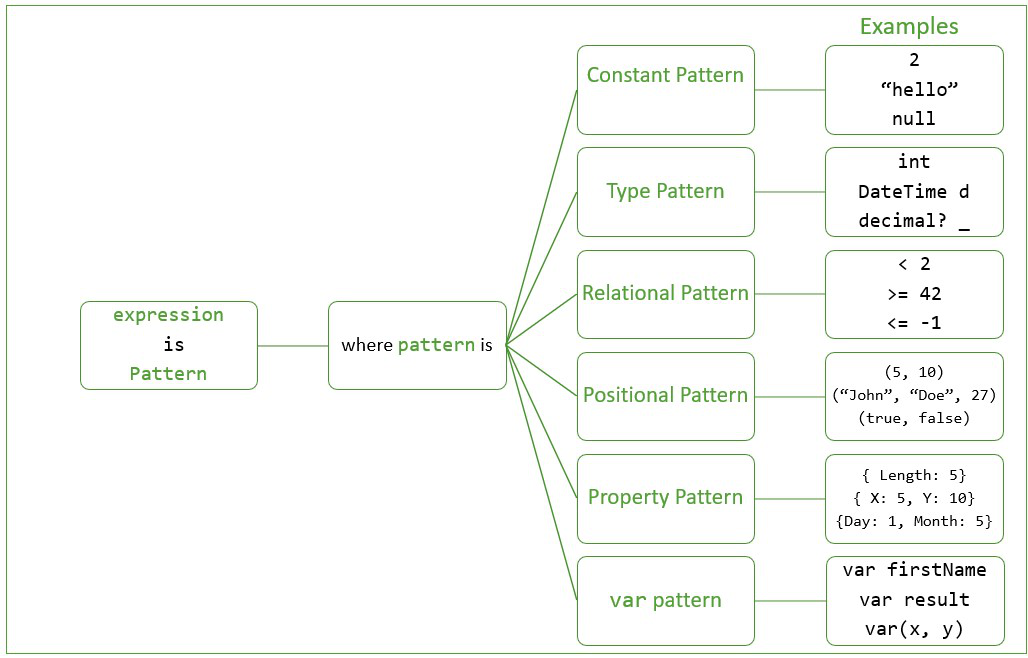 C# also supports the use of the following constructs with pattern matching:

The type pattern can be used to check if the runtime type of an expression matches the specified type or is compatible with that type. If the expression, that is, the value that is being matched is compatible with the type specified in the pattern, the match succeeds. The type pattern can optionally also contain a variable declaration. If the value that is being tested matches the type, then it will be cast to this type and then assigned to this variable. Variable declarations in patterns are described further.

In the example above, the PrintUppercaseIfString() method accepts an argument of type object called arg. Any type in C# can be up cast to object because, in C#, all types derive from object. This is called Type Unification.

If arg is a string, it will be downcast from object to string and will be assigned to a variable called message. If arg is not a string but a different type, the else block will be executed. Therefore, both the type checking and the cast are combined in one expression. If the type does not match, the variable will not be created.

Switching on Types with the Type Pattern

The type pattern used with a switch statement can help to select a branch of code (case branch) depending on the type of value. The code below defines a method called PrintType() which accepts an argument as an object and then prints different messages for different types of arguments:

The above example can be written more concisely using a switch expression:

Similarly, relational patterns can also be used with the is operator:

This may not be as useful on its own because n is <= 10 is the same as writing n <= 10. However, this syntax will be more convenient with pattern combinators(discussed further).

Property patterns allow matching values of properties defined on an object. The pattern specifies the name of the property to be matched and then after a colon(:) the value that must match. Multiple properties and their values can be specified by separating them with commas.

Such syntax allows us to write:

Example 1: Positional Pattern with a type that defines a Deconstruct() method

The code below defines two functions LogicalAnd() and LogicalOr(), both of which accept an object of BooleanInput. BooleanInput is a value-type(struct) that represent two Boolean input values. The methods use both these input values and perform a Logical AND and Logical OR operation on these values. C# already has logical AND(&&) and logical OR(||) operators which perform these operations for us. However, the methods in this example implement these operations manually to demonstrate positional patterns.

Any instance of System.ValueTuple can be used in positional patterns. C# provides a shorthand syntax for creating tuples using parentheses:(). A tuple can be created quickly on the fly by wrapping a set of already declared variables in parentheses. In the following example, the LocatePoint() method accepts two parameters representing the x and y coordinates of a point then creates a tuple after the switch keyword using an additional pair of parentheses. The outer parentheses are part of the switch statement syntax, the inner parentheses create the tuple using the x and y variables.

The constant pattern is the simplest form of a pattern. It consists of a constant value. It is checked whether the expression that is being matched is equal to this constant. The constant can be:

The constant pattern usually appears as part of other patterns as a sub-pattern(discussed further) but it can also be used on its own.

Some examples of the constant pattern being used with the is operator would be:

Notice the final example, where the pattern is null. This implies that pattern matching provides another way to check if an object is null. Also, expression is null may be more readable and intuitive than the typical expression == null.

Example: The following example uses a switch expression with the constant pattern in a method called DayOfTheWeek() which returns the name of the day of a week from the number passed to it.

Consider the following code where a DateTime object’s day and month has to be compared:

This can be written in one line using the var pattern:

Pattern combinators are a lot like logical operators(!, &&, ||) but the operands are patterns instead of conditions or Boolean expressions. Combinators make pattern matching more flexible and also helps to save a few keystrokes.

By using pattern combinators with the relational pattern, an expression can be compared with multiple other values without repeating the expression over and over. For instance, consider the following:

With pattern matching and combinators, this can be simplified:

As observable, the variable name number need not be repeated; comparisons can be seamlessly chained.

Checking if a value is non-null

Under the constant patterns section above, an alternative way to check if a value is null was discussed. Pattern combinators provide a counterpart that allows checking if a value is not null:

Example: The following example defines a method called IsVowel() that checks if a character is a vowel or not using the or pattern combinator to combine multiple constant patterns:

Some patterns support declaring a variable after the pattern.

Type Pattern: Variable declarations in type patterns are a convenient way to combine both a type check and a cast in one step.

This can be reduced down to a single step using a variable declaration:

Here, p and coords contain the same value and coords may little be of any use. But the above syntax is legal and sometimes may be useful with an object that defines a Deconstruct() method.

Note: Variable declarations are not allowed when using the or and not pattern combinators but are allowed with and.

Sometimes, the value assigned to variables during pattern matching may not be useful. Variable discards allow ignoring the values of such variables. A discard is represented using an underscore(_).

the variable i is never used. So, it can be discarded:

Beginning with C# 9, it is possible to use type pattern without a variable, which allows getting rid of the underscore as well:

It is possible to use a type pattern, positional pattern, and property pattern together without combinators.

The following can be written:

One or more of the patterns can be omitted. However, there must be at least one pattern, and the order when using multiple patterns together must be the same as above. For example, the following is illegal:

Consider the Point struct above and the following object point:

Type Pattern and var Pattern in a Property Pattern

Type Pattern and var Pattern in a Positional Pattern

For the next example, consider the following objects:

Property Pattern in a Positional Pattern 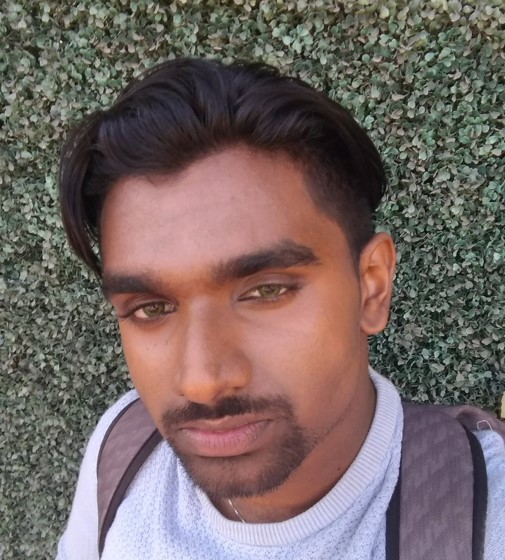