Improve Article
Passing array of objects as parameter in C++

Array of Objects:It is an array whose elements are of the class type. It can be declared as an array of any datatype.

Below is the C++ program to illustrate the array of objects by calculating the highest marks among 3 students: 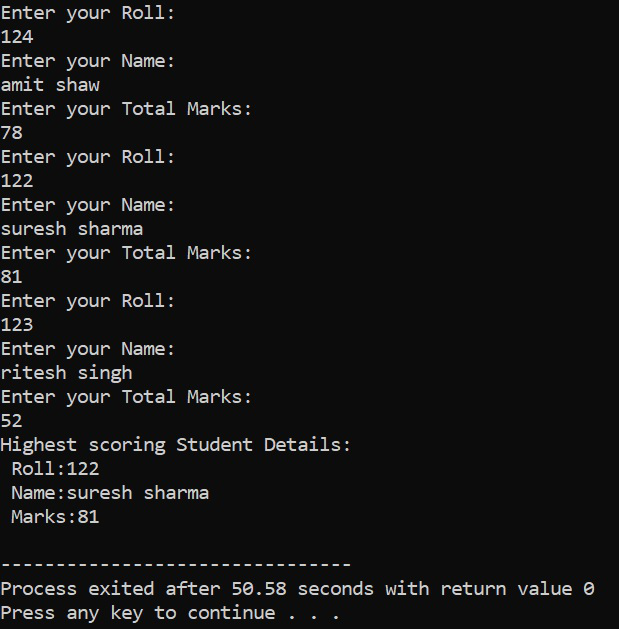 My Personal Notes arrow_drop_up
Previous
Employee Management System using doubly linked list in C
Next
Output in C++
Recommended Articles
Page :
Parameter Passing Techniques in C/C++
17, Jul 17
Passing and Returning Objects in C++
04, Feb 19
Extract unique objects by attribute from array of objects.
03, Dec 18
How to pass a 2D array as a parameter in C?
01, May 14
How to print size of array parameter in C++?
19, Feb 16
Passing by pointer Vs Passing by Reference in C++
08, Sep 16
Minimum points to be selected such that removal of line segments passing through them empties given array
05, Nov 20
Deletion of array of objects in C++
17, Jan 21
How to initialize Array of objects with parameterized constructors in C++
15, Apr 20
Difference between Argument and Parameter in C/C++ with Examples
25, Nov 19
Distribute M objects starting from Sth person such that every ith person gets arr[i] objects
19, Mar 21
Passing a vector to constructor in C++
28, Jan 18
Count passing car pairs
09, Mar 17
Passing vector to a function in C++
22, Sep 17
How to delete an element from the Set by passing its value in C++
03, Jan 19
Passing Reference to a Pointer in C++
19, Sep 18
Equation of straight line passing through a given point which bisects it into two equal line segments
18, Apr 19
C++ Classes and Objects
20, May 17
When are static objects destroyed?
31, May 14
Life cycle of Objects in C++ with Example
28, Aug 20
Introduction to Complex Objects and Composition
20, Jun 20
How to restrict dynamic allocation of objects in C++?
02, Feb 14
How to evenly put N objects into N places with adjacent moves
31, Dec 18
Comparing String objects using Relational Operators in C++
28, Jun 17
Article Contributed By :