Developers jumping into Python programming from other languages like C++ and Java are often confused by the process of passing arguments in Python. The object-centric data model and its treatment of assignment is the cause behind the confusion at the fundamental level. In the article below we will be discussing the concept of passing arguments in Python and try to understand it with the help of examples.

Is Python Argument Passing model a “Pass by Value” or “Pass by Reference”?

You might want to punch something after reading ahead, so brace your self. Python’s argument passing model is neither “Pass by Value” nor “Pass by Reference” but it is “Pass by Object Reference”.

The paradigms of “Pass by value”, “Pass by Reference” and “Pass by object Reference” can be understood by exploring the below example functions.
Look into the two functions defined below:

The variable is not the object passed:
What if I tell you The Ramayana was not written by Tulsi Das but The Ramayana was written by a man named Tulsi Das. Does that distinction make any sense? No right?!. But according to Python it does and it makes a crucial distinction. So, in Python and its PKD’s there is a big difference between the thing and the label we use to refer to that thing. “A man named Tulsi Das ” is just a man and “Tulsi Das” is a name used to refer to that man.
So, consider a list 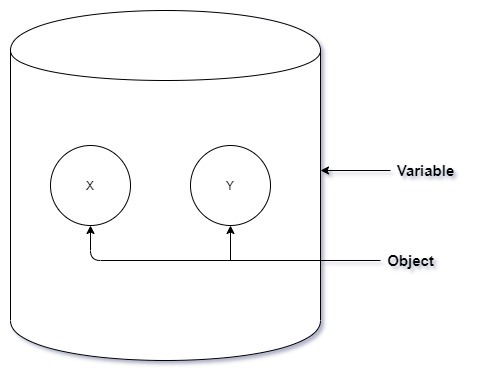 In pass by reference the variable( the bucket) is passed into the function directly. The variable acts a Package that comes with it’s contents(the objects). 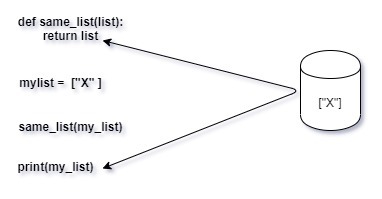 In the above code image both “list” and “my_list” are the same container variable and therefore refer to the exact same object in the memory. Any operation performed by the function on the variable or the object will be directly reflected to the function caller. For instance, the function could completely change the variable’s content, and point it at a completely different object: 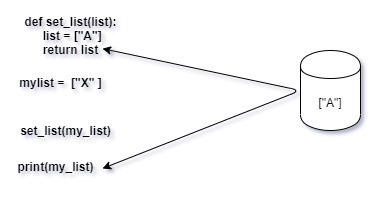 To summarise, in pass by reference the function and the caller use the same variable and object.

In pass by value the function is provided with a copy of the argument object passed to it by the caller. That means the original object stays intact and all changes made are to a copy of the same and stored at different memory locations. 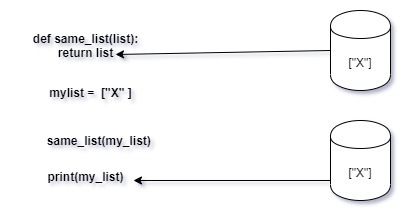 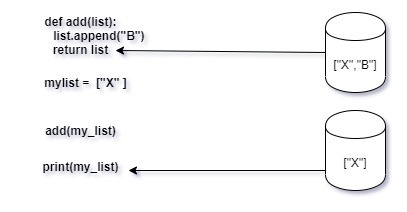 To summarise the copies of the variables and the objects in the context of the caller of the function are completely isolated.

My Personal Notes arrow_drop_up
Next
Is Python call by reference or call by value
Recommended Articles
Page :
How to write an empty function in Python - pass statement?
04, May 16
Loops and Control Statements (continue, break and pass) in Python
29, May 16
Pass list as command line argument in Python
21, Jan 20
Python | Split and Pass list as separate parameter
02, Sep 19
Difference between continue and pass statements in Python
22, Nov 19
break, continue and pass in Python
22, Nov 19
How to pass argument to an Exception in Python?
05, May 20
Python pass Statement
14, Jun 20
Python - pass multiple arguments to map function
22, Jun 20
Digital Low Pass Butterworth Filter in Python
06, Dec 20
Digital High Pass Butterworth Filter in Python
16, Dec 20
Digital Band Pass Butterworth Filter in Python
17, Dec 20
How to pass optional parameters to a function in Python?
13, Jan 21
Is Python call by reference or call by value
27, Jan 20
How to pass multiple arguments to function ?
17, Dec 19
How to pass data to javascript in Django Framework ?
31, May 20
How to Pass Arguments to Tkinter Button Command?
10, Dec 20
How to Pass Additional Context into a Class Based View (Django)?
13, Jan 21
Shared Reference in Python
15, Apr 20
How to Reference Elements in an Array in Python
03, Jan 21
PyQt5 QCalendarWidget - Removing memory reference
25, May 20
Pafy - Getting Weak Reference of Stream
12, Jul 20
Python - Extract ith Key's Value of K's Maximum value dictionary
31, Jul 20
Python - Replace value by Kth index value in Dictionary List
02, Dec 20
Article Contributed By :