Parallelism in Query in DBMS

Parallelism in a query allows us to parallel execution of multiple queries by decomposing them into the parts that work in parallel. This can be achieved by shared-nothing architecture. Parallelism is also used in fastening the process of a query execution as more and more resources like processors and disks are provided. We can achieve parallelism in a query by the following methods :

1. I/O parallelism :
It is a form of parallelism in which the relations are partitioned on multiple disks a motive to reduce the retrieval time of relations from the disk. Within, the data inputted is partitioned and then processing is done in parallel with each partition. The results are merged after processing all the partitioned data. It is also known as data-partitioning. Hash partitioning has the advantage that it provides an even distribution of data across the disks and it is also best suited for those point queries that are based on the partitioning attribute. It is to be noted that partitioning is useful for the sequential scans of the entire table placed on ‘n‘ number of disks and the time taken to scan the relationship is approximately 1/n of the time required to scan the table on a single disk system. We have four types of partitioning in I/O parallelism: 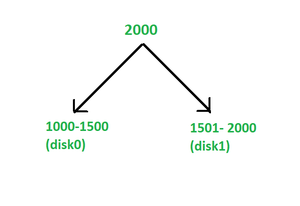 SELECT * FROM Vehicles ORDER BY Model_Number;

In the above query, the relational operation is sorting and since a relation can have a large number of records in it, the operation can be performed on different subsets of the relation in multiple processors, which reduces the time required to sort the data.