Lets us discuss both of the modifiers in-depth individually 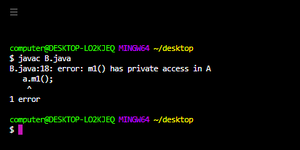 Finally, after getting it done with both of them let us conclude the evident differences between them which are as follows: