Oxoacids are oxygen-containing acids. Many oxoacids, such as H2SO4, H2SO3, and others, are known to be formed by sulphur. When sulphur is coordinated to oxygen, it forms a tetrahedral structure in oxoacids. Sulfur oxoacids are sulphur, oxygen, and hydrogen-containing chemical compounds. Sulfuric acid is the most well-known and widely utilised in industry. Sulfur contains various oxoacids; however, some of these are only recognised through their salts. The acids that have been described have a variety of structural characteristics.

Sulphuric acid is one of the most common sulphur oxoacids. It is a kind of diprotic acid (it ionises to give two protons). One atom of sulphur is connected to two hydroxyl groups in sulphuric acid, and the remaining two oxygen atoms form pie connections with the sulphur atom.

As a result, sulfuric acid has tetrahedral geometry. Because the bond length of the sulphur oxygen link is shorter than that of the S-OH bond, oxygen atoms repel OH groups. As a result, the bond angle in a double bond of sulphur and oxygen is greater than the bond angle in a single bond of sulphur and oxygen. It is manufactured industrially by the contact method. 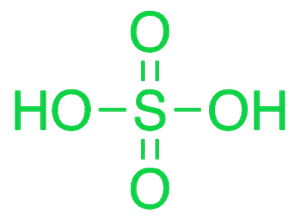 Sulphuric acid is a diprotic acid, which means that it ionizes two protons. One sulphur atom is bonded to two hydroxyl groups in sulphurous acid, and one oxygen atom forms a pi bond with the sulphur atom. Sulphur dioxide is dissolved in water to make it.

Despite the fact that there is no indication of sulphurous acid in the solution, the molecule can be separated in the gaseous phase. Because it is quickly oxidised into sulphuric acid, this acid acts as a potent reducing agent even in the presence of ambient oxygen. As a result, halogens become hydracids, ferric salts become ferrous salts, and so on. It also serves as a bleaching agent. 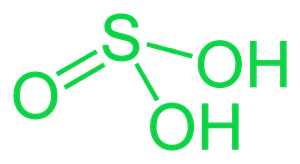 Sulphur in the +6 oxidation state is present in peroxodisulphuric acid. As a result, it is a strong oxidizing agent and a highly explosive substance in nature. Marshall’s acid is the common name for it. It has one peroxide group that forms a bridge between the two sulphur atoms.

Other than the peroxide group, each sulphur atom is linked to one hydroxyl group (S-OH bond) and two oxygen atoms (S=O bond). We can make it by reacting chlorosulfuric acid with hydrogen peroxide. The following is the reaction:

Pyrosulphuric acid is also referred to as oleum. It has a molecular mass of 178.13 g/mol. It is a colourless, crystalline solid with a melting point of 36°C that is an anhydride of sulphuric acid. It is made by reacting excess sulphur trioxide with sulfuric acid. The reaction is as follows:

It interacts with bases to generate salts known as pyrosulphates. It is used in the production of explosives and dyes. It is also utilised in the refining of petroleum. It is a potent dehydrating agent that is also corrosive. It can cause skin burns as well as eye discomfort. Long-term exposure can be lethal. 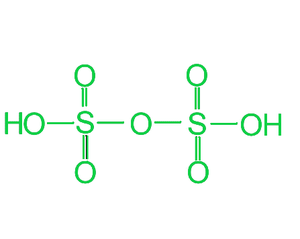 The inorganic substance with the formula H2S2O3 is thiosulfuric acid. It has piqued the curiosity of academics as a simple, easily accessible, labile chemical. It has few practical applications. 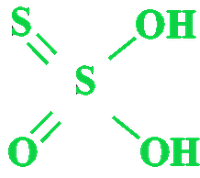 Dithionic acid is diprotic, and salts known as dithionates exist. There have been no discoveries of acid salts. Water rapidly dissolves all dithionates. They are both weak oxidizing and reducing agents. The dithionate ion has the same structure as ethane, but two SO3 groups adopt a nearly eclipsed configuration. 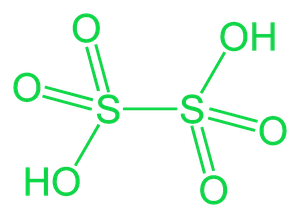 Question 1: Which are the Oxoacids of Sulphur?

Sulfur oxoacids are sulphur, oxygen, and hydrogen-containing chemical compounds. Sulfuric acid is the most well-known and widely utilised in industry.

Question 2: What are the 4 types of oxyacids of chlorine?

Question 3: Where sulphur is found?

Question 4: What are oxyacids used for?

As a powerful acid and an oxidising agent, nitric acid is widely utilised in laboratories and chemical industries. The acid is widely used in the production of explosives, dyes, plastics, and drugs. Nitrates are useful fertilisers.

Question 5: What is oxoacids chemistry?