A Kalman Filter is an optimal estimation algorithm. It can help us predict/estimate the position of an object when we are in a state of doubt due to different limitations such as accuracy or physical constraints which we will discuss in a short while.

Let’s dig deep into each of the uses one by one.

Explanation:
As we have discussed there are two major steps in the complete process first Update step and then prediction step. These two steps are looped over and over to estimate the exact position of the robot.

The prediction step :
New position p’ can be calculated using the formula

p’ = p + v * dt
where p is the previous position, v is the velocity and dt is the time-step.
new velocity v’ will be the same as the previous velocity as its constant(assumption). This in equation can be given as
v’ = v

Now to write this complete thing in a single matrix. 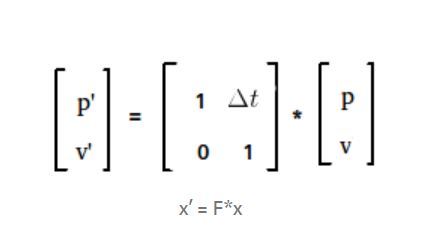 The update step :
The filter you just implemented is in python and that too in 1-D. Mostly we deal with more than one dimension and the language changes for the same. So let’s implement a Kalman filter in C++.

Requirement:
Eigen library
You will need the Eigen library, especially the Dense class in order to work with the linear algebra required in the process. Download the library and paste it in the folder containing the code files, in case you don’t know how libraries work in C++. Also go through the official documentation for a better understanding of how to use its functionality. I have to admit the way they have explained in the documentation is amazing and better than any tutorial you can ask for.

Now implementing the same prediction and update function in c++ using this new weapon(library) we have found to deal with the algebra part in the process.
Prediction Step:

x’=F*x + B*u + v
P’ = F * P * F.transpose() + Q
Here B.u becomes zero as this is used to incorporate changes related to friction or any other force that is hard to calculate. v is the process noise which determines random noise that can be present in the system as a whole.

With that, we were able to calculate the predicted value of X and the covariance matrix P.

So for lidar, the measurement function looks like this:

It also can be represented in a matrix form:

Representation in a Matrix form

In this step, we use the latest measurements to update our estimate and our uncertainty.

y= z – H*x
The error is mapped into a matrix S, which is obtained by projecting the System Uncertainty(P) into the measurement space using the measurement function(H) + Matrix R that characters measurement Noise.
S = H * P * H.transpose() + R
This is then mapped into the variable called K. K is the Kalman gain and decides whether the measurement taken needs to be given more weight or the prediction according to the previous data and its uncertainty.
K = P*H.transpose() * S.inverse()
And then finally we update our estimate(x) and our uncertainty(P) using this equation using Kalman gain.
x = x + (K * y)
P = (I – K * H) * P
Here I is an identity matrix.

The reason why I didn’t initialize the matrices at first is that that is not the main part while we are writing a Kalman filter. First, we should know how the two main function works. then come the initialization and other stuff.