Let us consider all the cases of Overriding in these methods

You must override hashCode() in every class that overrides equals(). Failure to do so will result in a violation of the general contract for Object.hashCode(), which will prevent your class from functioning properly in conjunction with all hash-based collections, including HashMap, HashSet, and Hashtable. (-Joshua Bloch)
Here is the contract, from the java.lang.Object specialization:

In this case we override both methods properly.
When we call map.put(g1, “CSE”); it will hash to some bucket location and when we call map.put(g2, “IT”);, it will generates same hashcode value (same as g1) and replace first value by second value because while iterating over same bucket it found a k such that k.equals(g2) is true, means searching key already exist. So, it replaces old value of that key by new value.

Case 2 : Overriding only the equals(Object) method 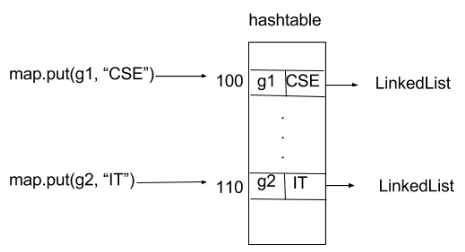 Consider another example of map :

When we call map.put(“xyz”, “CSE”); it will generate hashcode value and stores it to the bucket location that is specified with this address (hashcode value). And when we call map.put(“xyz”, “IT”); it generates same hashcode value as previous entry since key objects are same and hashCode() method has been overridden. So it should replace first with second as per rule. But it didn’t. Reason is, when it iterate through that bucket and seeks to find k such that k.equals(“xyz”) i.e. if searching key already exist. But it fails to find because equals(Object ) method has not been overridden. It is violation of rule of hashing. 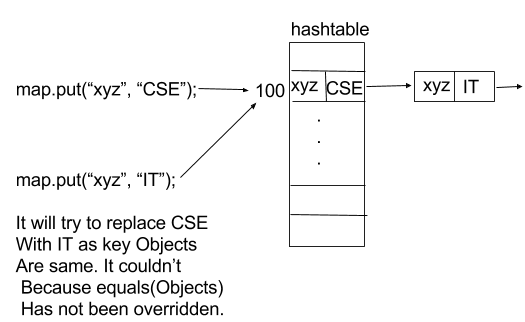 In above diagram when we call map.put(“xyz”, “IT”); then it tried to replace first value (CSE) by second value(IT) but it was not possible so it insert second pair (key, value) into a new LinkedList node that hashmap internally use. It it total violation of rule as key are unique in map.