Let us first define the meaning of Omniglot before getting in-depth into the classification task.

Omniglot Dataset: It is a dataset containing 1623 characters from 50 different alphabets, each one hand-drawn by a group of 20 different people. This dataset was created for the study of how humans and machines adapt to one-shot learning, i.e. learning a task from just one example.

The omniglot dataset has been prepared in such a way that each character in the above image has been written by 20 different people.

Omniglot Challenge: The omniglot challenge released to the Machine Learning and AI community is focused on 5 major tasks:

When a human sees an object for the first time, they are able to remember a few features of that object. So, whenever they see some other object of the same kind, they are able to identify it immediately. Even if they have seen that object only once, humans are able to associate it with that class. This is known as One-Shot Learning. Let us take an example.

Suppose a person has seen a fridge for the first time on television and wishes to buy it. When that person visits the electronics store, he/she is able to immediately identify which appliance is a fridge and which is not. This principle of the human brain is known as One-Shot Learning.

As per definition, One-shot learning is a technique used by machines to classify new objects into different classes provided that it has only seen one object from each class during its training.

One-shot learning uses the Siamese Neural Network model. Here, the objective of the model is find the ‘degree of similarity‘(d) between 2 images. We find d by using the following formula:

Now, we find the 128-D feature vector of each image by passing it through a CNN model. This way we obtain all the key features present in a particular image. (As shown in Fig. 2)

During the training phase of Siamese Network model, we use the triplet loss function. In this, we take a 128-D feature vector of two similar images (Positive and Anchor) and one different image from the dataset (Negative).

We train the model based on the set of 3 images where the similarity distance between the two similar images is quite small. So, the smaller the distance, the more similar the two images are. (as shown in Fig 3 – Step 7) 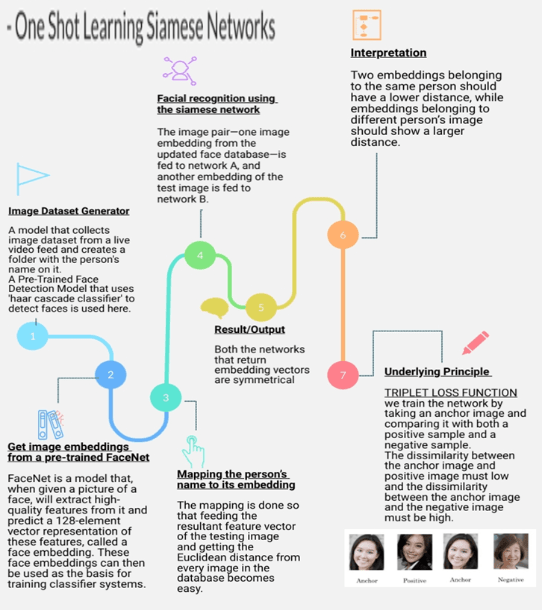 As discussed above, the triplet loss function uses multiple combinations of 3 images (the anchor, the positive and the negative) for training. During this phase, we will be looking at different ways of one-shot classification with varying sizes of the support set.

N Support Set: It is a set of N images that are matched with the newly received image during the testing phase.

We find the similarity distance d, between each image in the support set and the new input image. The image that shows the most similarity (the smallest value of d) determines the class the new image will be classified into.

These are some N-way classification versions given below:

Refer to Fig 4 for a better understanding of the working of N-way classification. 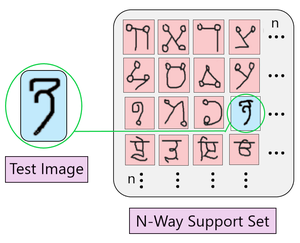 As shown in the above image, in an N-way one-shot classification, there will be one image that will be the most similar to the input test image compared to the rest of the (N-1) pair of images. We can set the value of N as per our need. We must understand the importance of choosing an optimal value of N here.

So, as per our requirement, we much choose an appropriate N-way one-shot classification model during the testing phase to get the optimum results. For any doubt/query, comment below.