According to Ohm’s law, the voltage or potential difference between two locations is proportional to the current of electricity flowing through the resistance, and the resistance of the circuit is proportional to the current or electricity travelling through the resistance. V=IR is the formula for Ohm’s law. Georg Simon Ohm, a German physicist, discovered the connection between current, voltage, and relationship. Let’s take a closer look at Ohms Law, Resistance, and its applications.

What is Ohm’s Law?

Voltage, current, and resistance are the three most fundamental components of electricity. Ohm’s law depicts a straightforward relationship between these three variables. According to Ohm’s law, the current flowing through a conductor between two locations is proportional to the voltage across the conductor. 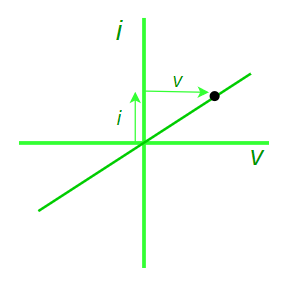 This is one of the most fundamental electrical rules. It aids in the calculation of an element’s power, efficiency, current, voltage, and resistance in an electrical circuit.

The SI unit of resistance is ohms and is denoted by Ω.

When the other two numbers are known, Ohm’s law may be used to determine the voltage, current, impedance, or resistance of a linear electric circuit.

How do we establish a current-voltage relationship?

The ratio V ⁄ I remains constant for a given resistance while establishing the current-voltage connection, hence a graph of the potential difference (V) and current (I) must be a straight line.

How can we discover the unknown resistance values?

The resistance, at a given temperature,

Here, ρ is the specific resistance or resistivity and is the wire material’s characteristic.

The wire material’s specific resistance or resistivity is,

One of the most important components in electrical circuits is the resistor. Because they are comprised of a clay or carbon combination, they are good conductors and good insulators. Four colour bands are seen on the majority of resistors. The first and second bands show the value’s first and second digits, respectively. The value digits are multiplied in the third band, and the tolerance is determined in the fourth band. If there isn’t a fourth band, the tolerance is presumed to be plus or minus 20 %. 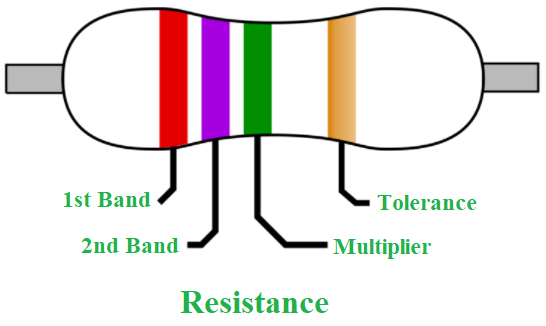 A series is a group of related items, such as along a line, in a row, or in a certain order. In electronics, series resistance implies that the resistors are linked in series and that current can only travel via one channel.

A parallel circuit can be organised in a variety of ways. The majority of wiring in the real world is done in parallel, such that the voltage provided to any one portion of the network is the same as the voltage given to any other section of it.

Problem 1: Find the resistance of an electrical circuit with a voltage supply of 15 V and a current of 3 mA.

The resistance of an electrical circuit is given as:

Hence, the resistance of an electrical circuit is 5 kΩ.

Problem 2: If the resistance of an electric iron is 10 Ω and a current of 6 A flows through the resistance. Find the voltage between two points.

The formula to calculate the voltage is given as:

Hence, the voltage between two points is 60 V.

Problem 3: When does Ohm’s law fail?

The behaviour of semiconductors and unilateral devices like diodes defines Ohm’s law. If physical factors such as temperature and pressure are not kept constant, Ohm’s law may not provide the intended effects.

Semiconducting devices are nonlinear in nature due to which Ohm’s law does not apply to them. This indicates that the voltage-to-current ratio does not remain constant when voltage varies.

Problem 5: What is the application of Ohm’s Law?

The static values of circuit components such as current levels, voltage supplies, and voltage drops are validated using Ohm’s law.