You’re undoubtedly aware that throwing a ball against a wall causes the ball to exert force on the wall. Similarly, the wall exerts a force on the ball, causing it to bounce off the wall. Similarly, the earth’s gravitational attraction pushes you down. What you may not understand is that you are also putting equal power on the ground. This amazing statistic is a result of Newton’s third law.

What are Newton’s Laws of Motion?

The following are Newton’s Laws of Motion :

Newton’s Third Law of Motion states that: “To every action there is always an equal and opposite reaction.” Action and reaction forces are applied on different bodies at the same instance time frame. The system maintains its equilibrium. 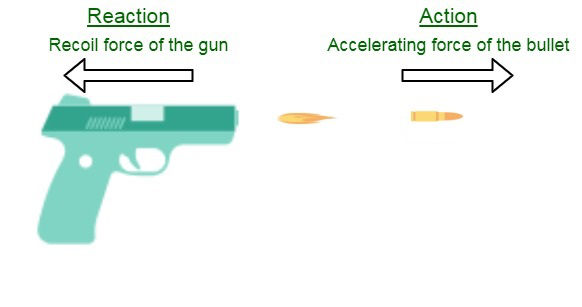 According to Newton’s third law, when two bodies engage, they apply forces to each other that are equal in magnitude and opposing in direction. The third law is also known as the action-reaction law. This law is useful in assessing static equilibrium issues in which all forces are balanced, but it also applies to things in constant or accelerated motion.

The forces it explains are genuine, not just techniques. A book, for example, sitting on a table exerts a downward force equal to its weight on the table. The table exerts an equal and opposite force on the book, according to the third law. The weight of the book causes the table to slightly bend, causing it to press back on the book like a coiled spring.

Mathematically, Newton’s Third Law of Motion can also be written as shown below: 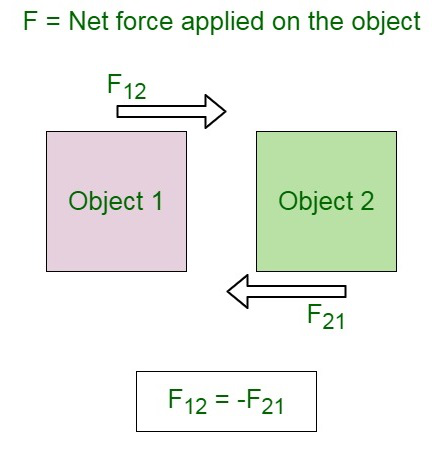 Forces always occur in pairs. If two bodies A and B exist within a system, then the force of A on B and force of B and A become internal forces of the system, and they cancel each other since they are opposite in direction and equal. As a result, the system maintains its equilibrium.

Proof that Action and Reaction are Equal and Opposite

To understand the concept of the action and reaction forces, let us consider a system of two spring balances A and B connected together. 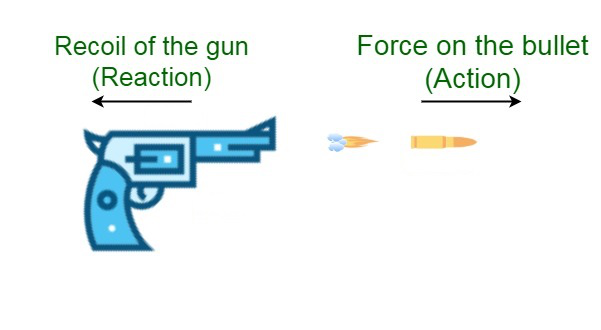 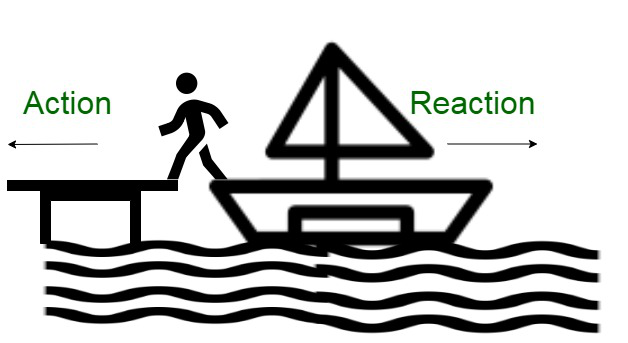 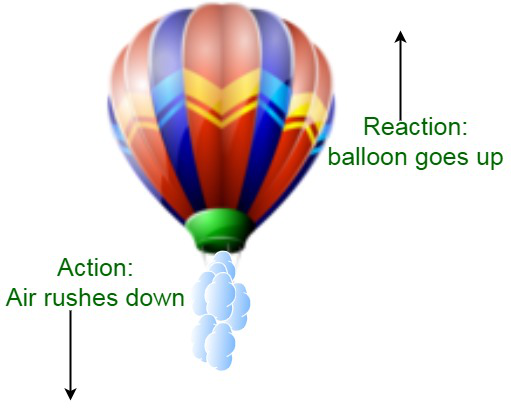 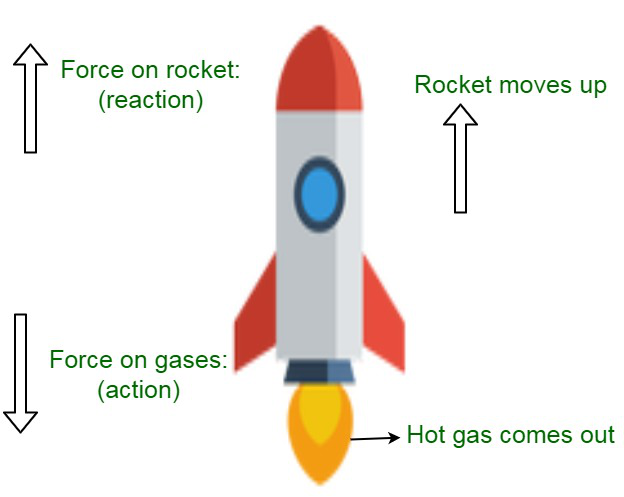 Different kinds of fuels are burned in the rocket’s engine, producing hot gases. These gases push against the inside tube of the rocket. After igniting and burning through the inside tube, the gases escape from the bottom of the rocket.  As these gases flow downward, the rocket rises in the sky towards the upward direction. Therefore, as the gases and rocket move in the opposite direction w.r.t each other. The reaction of a rocket is the application of the third law of motion. 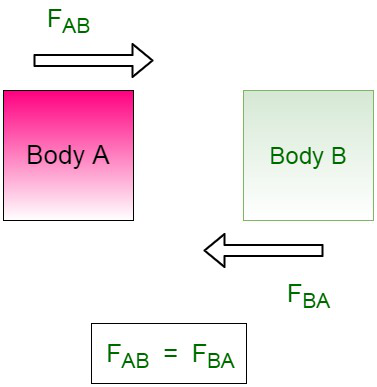 Newton’s third law of motion states that every action has equal and opposite reaction.

For a system of two bodies, A and B, let us assume FAB is a force of body A acting on B and FBA is force by B  on body A.

The mathematical expression w.r.t the forces is given by,

where, FAB is an action on B while FBA is reaction of body B on A.

Let us assume an isolated system with no external forces acting upon them, consisting of two massive bodies A & B mutually interacting with each other. Now, Let us consider both bodies to be in effect of a force under the influence of each other, that is, FAB, to be the force exerted on body B by body A and FBA be the force exerted by body B on A.

Due to these forces, FAB and FBA, let us assume dp1/dt and dp2/dt to be the rate of the change of momentum in the effect of these bodies respectively.Then,

Adding these equations as:

Since, no external force acts on the system, therefore:

The above equation represents Newton’s third law of motion (i.e, for every action there, is an equal and opposite reaction).

Problem 1: A car with a mass of 1250 Kg traveling by an acceleration of 10 m/s2 hits a bike. What force does the car experience?

According to Newton’ second law,

Now according to Newton’s third law, for every action, there is an equal and opposite reaction.

Thus, the car experiences a force of 10 N.

The force that the dog applies to the table is its weight. As per Newton’s third law, the table also applies a force to the dog of the same magnitude.

The force on the dog from the table is:

Problem 3: A boy is riding his scooter and pushes off the ground with his foot. Thus this causes him to accelerate at a rate of 8 m/s2. Boy’s weight is 600 N. What is the strength of his push off the ground? Use g = 10 m/s2.

The formula to calculate the force on an object is,

where m is the mass and a is the acceleration.

Boy accelerates at 8 m/s2. so, he is pushed by a force of

According to Newton’s third law, Every action has an equal and opposite reaction.

Thus, the force has an equal and opposite force on the other body.

Mathematically, this just means to negative the force. Therefore, the force as a function of time in the x-direction on the other body is -ky – b.

Problem 5: What happens to the magnitudes of force and acceleration of the gun and the bullet, when a player shoots a gun and the force of the shot results in recoil?