While Newton’s principles of motion may appear simple to us now, they were revolutionary centuries ago. The laws of motion explain how things behave when they are stationary, moving, or under the influence of forces. The Laws of Motion of Newton are described in this page, along with a synopsis of what they signify.

The laws of motion define the connection between a body and the forces that operate on it, as well as motion of the body in response to those forces. To be more explicit, the first rule of motion describes the force qualitatively, the second law of motion quantifies the force, and the third rule of motion asserts that there is no such thing as a single isolated force.

Galileo’s law of inertia is another name for Newton’s First Law of Motion. Unless driven to change its condition by an external force, a body remains in its condition of rest or uniform motion along a straight line. The force is defined in the law as a factor that can modify the condition of an item.

Inertia is a quality of a body that prevents it from changing its state. The inertia of translational motion is measured by a body’s mass.

A body of more mass has a harder time changing its condition of rest or uniform motion, and vice versa. 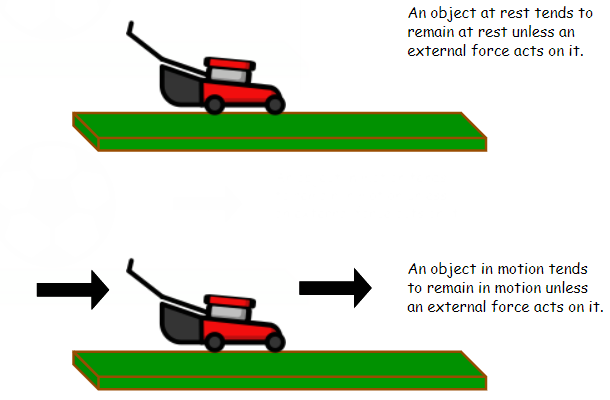 The First Law of motion depends on three conditions:

1. Inertia of Rest: An object at rest tends to remain at rest unless an external force acts on it.

2. Inertia of Motion: An object in motion tends to remain in motion unless an external force acts on it.

3. Inertia of Direction: A body can’t change its motion direction on its own.

What is an External Force?

A force is defined as the push or pulls that affects or tends to modify the condition of rest or uniform motion (constant velocity) of a body, according to Newton’s first law of motion.

The force of gravity exerted by the moon’s inner core on its outer crust, on the other hand, is an internal force on the moon. Internal forces within an object cannot alter the overall motion of the item.

Some daily life examples are as below:

Problem 1: Why do Objects Slow Down?

The slowing down of items was thought to be an inherent characteristic of the things prior to Newton and Galileo. Friction and gravity were unknown forces at the time. The frictional force resists an object’s motion, causing it to lose energy and hence slow down.

When we watch a toy car traveling on a concrete surface, for example, the speed of the automobile is governed by the friction between the road and the vehicle wheels. The wheel will meet with little resistance when the toy automobile is driven over a smooth surface. This will create a frictional hurdle, allowing the automobile to accelerate across the entire plain tile surface.

This is in stark contrast to when a vehicle toy is driving on a slick, gravel-filled terrain. The idea of change in the condition of rest or motion is defined by Newton’s first law of motion.

Problem 2: What is Newton’s first law of motion?

Newton’s first law of motion states that a body at rest will remain at rest, and a body in motion will remain in motion unless it is acted upon by an external force.

Problem 3: What is motion?

The change in position of a body/object with regard to time is known as motion. Distance, displacement, speed, velocity, and acceleration are the characteristics used to characterize motion.

Problem 4: What do you mean by force?

A force is defined as the push or pull that affects or tends to modify the condition of rest or uniform motion (constant velocity) of a body, according to Newton’s first law of motion.

Problem 5: What is inertia?

A characteristic of matter that allows it to remain in its current condition of rest or uniform motion in a straight line until it is disrupted by an external force is called an inertia.