%n in scanf() in C with Example 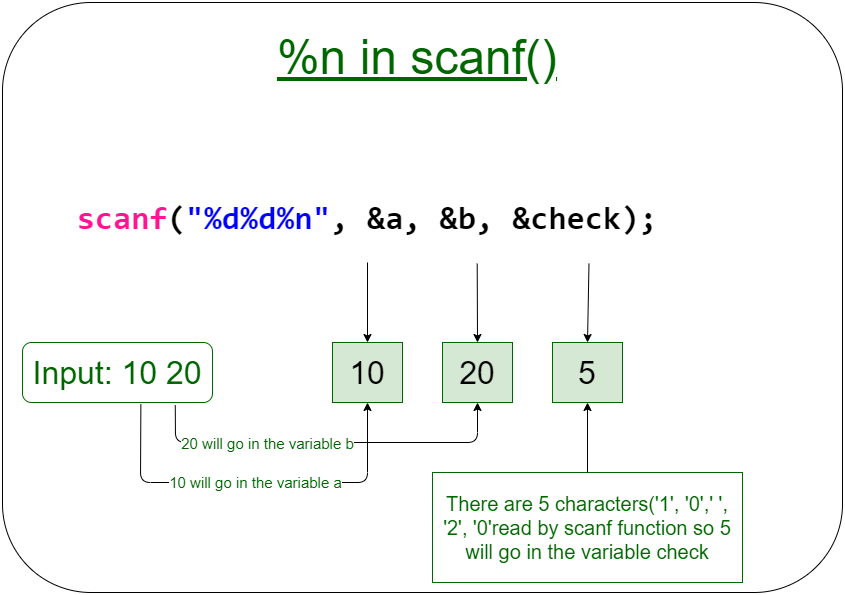 Below is the program to demonstrate the working of %n in scanf():

Input:
Below is the input to the above code:

Output:
Below is the output to the above code:

Explanation:
scanf() function assigns the 10 and 20 in a and b respectively and 5 in variable check because there are 5 characters read by scanf function(including spaces).

My Personal Notes arrow_drop_up
Previous
Ellipsis in C++ with Examples
Next
Count of Equilateral Triangles of unit length possible from a given Hexagon
Recommended Articles
Page :
Effect of adding whitespace in the scanf() function in C
14, May 21
All forms of formatted scanf() in C
22, Sep 21
Command line arguments example in C
30, Nov 17
tellg() function in C++ with example
05, Jun 18
Difference between Public and Private in C++ with Example
15, Oct 19
Life cycle of Objects in C++ with Example
28, Aug 20
All forms of formatted scanf() in C
22, Sep 21
Maximize the rightmost element of an array in k operations in Linear Time
24, Aug 21
C++ program to convert/normalize the given time into standard form
24, Aug 21
Tourism Management System in C/C++
13, Aug 21
C++ program to implement Full Adder
10, Aug 21
Handling multiple clients on server with multithreading using Socket Programming in C/C++
10, Aug 21
Article Contributed By :