The topic of induction was first given by Oersted by discovering that a magnetic field is produced through an electric field. After this, different scientists started to think can the reverse is possible .i.e. can we produce electric current from a magnetic field.

Michael Faraday and Joseph Henry simultaneously established that an electric current is generated in a coil when the coil and a magnet are in relative motion. The current produced here is called induced current and e.m.f produced are called induced e.m.f. In this topic, we will see what is Electromagnetic Induction and one of its types which is Mutual induction.

There are two types of Electromagnetic Induction they are,

When two coils are kept near each other and current change in one coil is causing e.m.f change in other then this phenomenon is called mutual induction.

Consider the circuit given below, 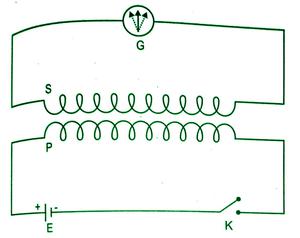 As shown in the above figure, let there be two coils placed close to each other namely P and S. The coil P has a power source (E) and a key (k) and coil S has a galvanometer to detect the deflection. Here, let coil P be Primary coil and coil S be Secondary coil.

Magnetic Flux (φ): The number of magnetic field lines passing through a closed surface is known as magnetic flux. It calculates the total magnetic field that travels across a specific surface area.

The magnetic flux w.r.t coil S at any instance is related to the current flowing through the primary coil at that instance.

Here, M is the coefficient of mutual inductance of the coil

So, we can find e.m.f. induced in the secondary coil (S) at any instant,

Mutual inductance depends on the number of turns on the coil, size of the coil, separation between each turn and the angle of the turns, and the medium where the coils are placed.

Eddy current and its relation to mutual induction

Example of eddy current, speedometer in our vehicle.

Mutual induction is the principal cause of eddy current formation and generation in the test material. An alternating current is transmitted through a wire coil as the test material. An eddy cope device is then attached to the probe. Any conductive substance can be used for the next circuit. A magnetic field is generated in and around a coil when electricity is conducted through it. When a probe is introduced close to a conducting substance, the alternating magnetic field of the probe causes current to flow through it. These currents run in closed loops at right angles to the magnetic flux in a plane. Eddy currents are what we call them.

These eddy currents generate their magnetic field, which interacts with the coil’s primary magnetic field. Analyzing the variances in the resistance and inductive reactance of the provided coil might provide information about the test material.

Coupling Coefficient: It’s the open circuit to actual voltage ratio, as well as the ratio obtained if the flux is connected from one circuit to the other. It is related to mutual inductance and is a simple approach to comprehend the relationship between certain inductor orientations and arbitrary inductance.

Question 1: Why is this inductance called “mutual Induction”?

Question 2: What is the induced e.m.f. in a circular coil kept in a magnetic field?

There is no variation in magnetic flux created since the coil is in a homogeneous magnetic field. As a result, the coil has no induced e.m.f.

Question 3: What are the S.I Unit and Dimensions of Mutual Induction?

Question 4: What factors have an impact on mutual inductance?

The factors that effects the mutual inductance are:

Question 5: What is magnetic flux?

Magnetic Flux (φ): Magnetic flux is the number of magnetic field lines traveling through a closed surface. It determines the overall magnetic field that goes across a certain region.

Question 6: Where do we use the principle of mutual induction?

We mostly use mutual induction in, transformers, generators, and all the electronic devices which use a magnetic field.

Question 7: Two coaxial coils are very closer to each other and their mutual inductance is 10mH. If a current (60 A) sin 600t is passed in one of the coils, then find the peak value of induced e.m.f. in the secondary coil.

Thus according to the Mutual induction formula