Hans Christian Oersted discovered in 1820 that a current-carrying conducting wire produces a magnetic field around it. His findings from his experiments are as follows:

The force that can cause an object to twist along an axis is measured as torque. In linear kinematics, force is what causes an object to accelerate. Torque is also responsible for the angular acceleration. As a result, torque can be defined as the linear force’s rotational equivalent. The axis of rotation is the point at which the item rotates. Torque is the property of a force to turn or twist.

The torque might be static or dynamic. A torque that does not cause an angular acceleration is known as static torque.

When a rectangular loop with N turns of area A each carries a continuous current I and is put in a uniform magnetic field B so that the loop’s normal to the plane makes an angle with the magnetic field’s direction, the loop experiences a torque whose magnitude is given by:

The magnetic dipole moment of the current loop is defined as,

The magnetic dipole moment of a current-carrying loop can be calculated as the product of the loop’s current and total area, i.e.

Due to the current in the loop, the magnetic dipole moment is a vector quantity with a direction parallel to the magnetic field direction.

A moving coil galvanometer is an instrument for measuring electric currents. It’s a sensitive electromagnetic gadget that can detect extremely low currents, down to a few microamperes.

There are two primary types of moving-coil galvanometers:

Magnetic torque is experienced when a current-carrying coil is put in an external magnetic field. The angle through which the coil is deflected due to the magnetic torque effect is proportional to the coil’s current magnitude.

The moving coil galvanometer is made consisting of a rectangular coil with several turns that are wound on a metallic frame and is usually constructed of thinly insulated or fine copper wire. The coil rotates freely around a fixed axis. The coil is suspended in a uniform radial magnetic field using a phosphor-bronze strip coupled to a moveable torsion head.

Conductivity and a low torsional constant are two important qualities of the material used to suspend the coil. To boost the strength of the magnetic field and make it radial, a cylindrical soft iron core is symmetrically positioned inside the coil. The coil’s lower half is connected to a phosphor-bronze spring with a modest number of turns. The spring’s other end is attached to binding screws.

The spring is employed to generate a counter torque that serves to balance the magnetic torque and produce a consistent angular deflection. The deflection of the coil is measured using a plane mirror attached to the suspension wire, as well as a lamp and scale arrangement. The scale’s zero points are in the middle. 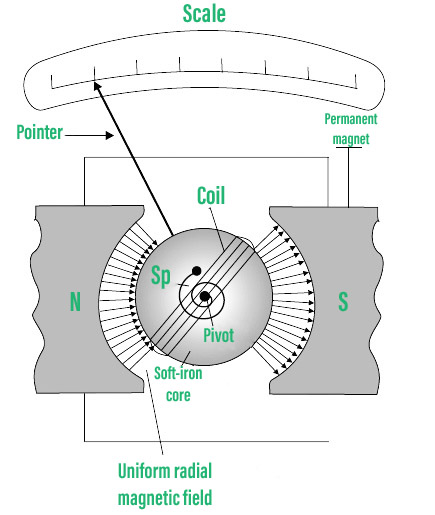 Allow me to pass through a rectangular coil with n turns and an area of A in cross-section. When the coil is placed in a uniform radial magnetic field B, it experiences a torque. Consider a rectangular coil with a length of l and a width of b with a single turn ABCD. The coil is suspended in a magnetic field of strength B, with the plane of the coil parallel to the field. The sides AB and DC are not subjected to any magnetic field’s effective force because they are parallel to the field’s direction.

The perpendicular to the field’s direction sides AD and BC are subjected to an effective force F, which is given by,

We may deduce that the forces acting on AD and BC are in opposite directions using Fleming’s left-hand rule. When equal and opposite forces F, known as the pair, act on the coil, a torque is produced. The coil deflects as a result of the torque.

Using the value of F that we already know as a substitute,

Hence the torque acting on n turns of the coil is given by,

The coil rotates as a result of the magnetic torque, and the phosphor bronze strip twists. The spring S linked to the coil, in turn, provides a counter torque or restoring torque k, resulting in a constant angular deflection.

The torsional constant of the spring is denoted by the letter k (restoring couple per unit twist). The deflection or twist is measured by a pointer attached to the suspension wire that indicates a value on a scale.

For a given galvanometer, the quantity nAB / k is a constant. As a result, it is clear that the deflection of the galvanometer is proportional to the current flowing through it.

The ratio of change in deflection of the galvanometer to change in current in the coil is the broad definition of sensitivity experienced by a moving coil galvanometer.

The figure of Merit of a Galvanometer: It’s the proportion of the full-scale deflection current of the instrument to the number of graduations on the scale. It’s also the reciprocal of the current sensitivity of a galvanometer.

Factors affecting Sensitivity of a Galvanometer:

Because the moving coil galvanometer is such a sensitive instrument, it may be used to detect the presence of current in any circuit. When a galvanometer is used in a Wheatstone’s bridge circuit, the pointer in the galvanometer exhibits no deflection, indicating that no current is flowing through the device. Depending on the direction of the current, the pointer deflects to the left or right.

By connecting it in parallel to low resistance, the galvanometer can be used to measure:

Conversion of Galvanometer to Ammeter

The current via the shunt resistance, when current Ig passes through the galvanometer is given by,

Due to the parallel nature of their connection, the voltages across the galvanometer and shunt resistance are equal. 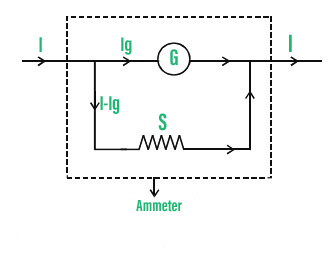 Conversion of Galvanometer to Voltmeter

By putting a galvanometer in series with large resistance, it can be transformed into a voltmeter. Depending on the voltmeter’s range, a suitable high resistance is selected.

The voltage drop across the branch ab is given by when current Ig travels through the series combination of the galvanometer and the high resistance R.

Advantages of a Moving Coil Galvanometer are:

Disadvantages of a Moving Coil Galvanometer are:

Problem 1: For a current of 4mA, a galvanometer coil with a resistance of 40 shows full range deflection. How can this galvanometer be transformed into a 0-12 V voltmeter?

Problem 2: What is the purpose of putting a soft iron cylindrical core inside the moving coil galvanometer?

The inside of the galvanometer has a cylindrical soft iron core that boosts the magnetic field strength and so improves the instrument’s sensitivity. It also makes the magnetic field radial, ensuring that the angle between the coil’s plane and the magnetic lines of force is always zero during rotation.

Problem 3: With a resistance of 0.1 Ω, a moving coil galvanometer of resistance of 100 Ω is used as an ammeter. The galvanometer’s maximum deflection current is 100 μA. Find the current in the circuit that causes the ammeter to deflect the most.

Substituting the given values, we get I= 100.1mA

Problem 4: What is the principle of Moving coil galvanometer?

Magnetic torque is experienced when a current-carrying coil is put in an external magnetic field. The angle through which the coil is deflected due to the magnetic torque effect is proportional to the coil’s current magnitude.