Moore Machines: A Moore Machine is basically a DFA with an output associated with every state. These machines can be used for a wide variety of tasks such as counting occurrences of a particular substring in a given string, finding 2’s complement of a binary number, etc.

Some Applications of Moore Machine

Application 1:
Given a string S consisting of a and b, and a substring “abb”, the task is to count the occurrence of the given substring str in the given string S using Moore Machines.

Approach:
The required Moore Machine for this problem is given by:

The Transition table for the machine is given below:

To implement this, create a structure for mapping input to its next state:

Then, include this struct as a data member to our class State. The class has three data members:

Each object of the class behaves as a state. It takes input and goes to the appropriate next state. To go to the next state, an object pointer can be used. Every object also has an input associated with it.

The following member functions will be used to work on this data:

The next step is to store the current state of the machine while passing string inputs to it. This can be done by using a static Object pointer as a class data member:

Time Complexity: O(N)
Auxiliary Space: O(N)
Application 2:
Given a binary string str, the task is to find the 2s complement of the given string str.

Approach: The idea is to start from the rightmost bit and pass it into the machine giving the output. Pass the whole string like this, going from right to left. The following observations can be observed:
For Example: The given string is “111010000”. Now, 2s complement is given by 1s complement of(str) + 1. Therefore,

Here we can observe that from the rightmost bit the bits are copied the same way until 1 appears. After that all the bits are reversed.
Therefore, the idea is to define a Moore Machine to start to take input from the rightmost side. As long as the bit is 0 it gives the same output(0). When 1 is encountered then it gives 1 for that. After this, for any bit taken as input its inverse is given as output.

The Moore Machine for this problem is given below: 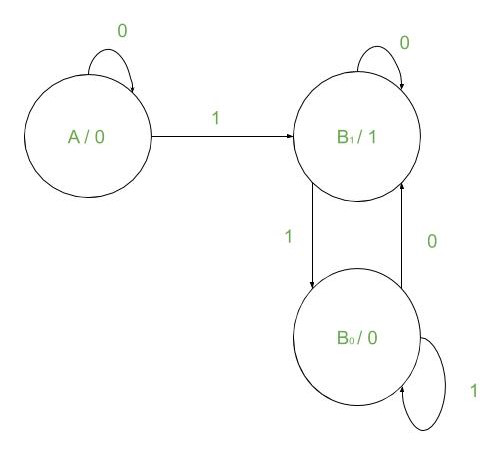 To implement this first, map the transition table for this machine. Three states are needed i.e. three objects of class State defined at the beginning:

Time Complexity: O(N), where N is the length of the given binary string.
Auxiliary Space: O(N)